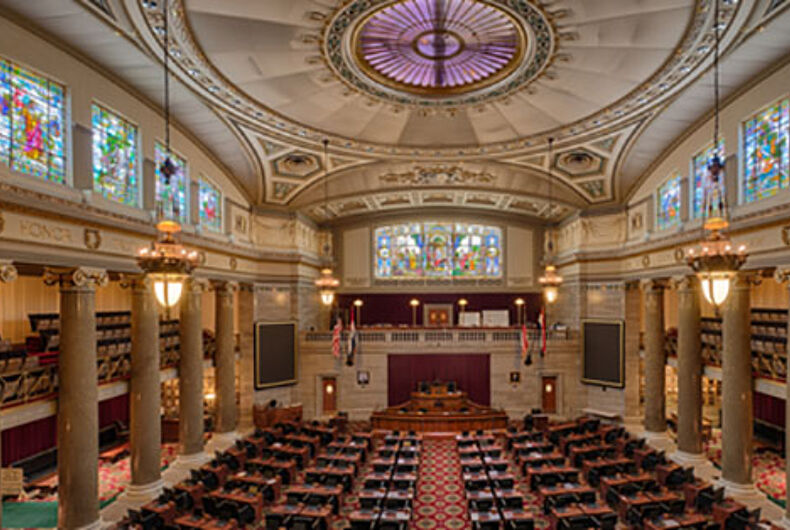 Members of Missouri’s House of Representatives have three weeks to decide whether a bill to establish nondiscrimination protections for LGBTQ citizens, now in committee, will become law, or die, like so many prior efforts. Not one has even made it to a vote in more than a decade of attempts.

And a contentious hearing held Tuesday to debate that bill, the Missouri Nondiscrimination Act, did not leave a lot of room for encouragement.

Last month Missouri’s State Senate voted down a similar measure to extend protections to LGBTQ people. And while speakers on both sides of the issue displayed passion for their beliefs, they also pulled back the curtain on how very far apart they are from reaching agreement, according to the Kansas City Star.

“Until we pass this legislation, I can still be fired from my job because I’m gay,” Rep. Greg Razer said, alongside Rep. Randy Dunn, his cosponsor of the act. “The two of us can go to a restaurant tonight here in Jefferson City and be forced to leave because we’re gay, and we would have no legal recourse. We feel that in 2017 in the state of Missouri, that would be unacceptable.”

There was one lone voice from across the aisle: Rep. Tom Hannegan also testified in favor of the bill. He is the only openly gay Republican in the Missouri General Assembly.

A bill to expand protections against discrimination, say opponents, would infringe on the rights of certain religious groups. Alyssa Johnson of Concerned Women for America testified protecting LGBTQ people is a direct affront to her religious convictions.

“I’m an Evangelical Christian, and my viewpoint on the matter is that the Bible does not condone homosexual lifestyles,” Johnson told the panel. “The government is not there to say that ‘I’m going to disenfranchise this group on behalf of this group.’ ”

Rep. Gina Mitten, a Democrat from St. Louis, replied that’s pretty much how people used to object to racial equality and interracial marriage.

“Many people have different interpretations about what the Bible says,” Mitten told Johnson. “So I’m assuming that you don’t think it’s okay, or that the Bible says it’s okay to discriminate against someone because of their color.”

Johnson wasn’t about to take the bait.

“I’m just saying that people have a personal responsibility that if they’re in a situation that is unhappy for them, they have the right to find other employment,” said Johnson. “No one is mandating that they have to stay in that situation.”

“Liberty to pursue other opportunities — just work somewhere else?” Roberts asked. “That’s acceptable to you?”

At least one voice from the pulpit spoke in favor of the bill: Retired Hannibal Presbyterian Church pastor Chuck Robb supports the measure, reported Missourinet.

“The issues of the pain and exclusion breaks my heart, not just as a human being but as a pastor,” said Robb.

Brian Bunten, general counsel for the Missouri Chamber of Commerce and testifying on behalf of the business community, said the chamber would fight against the addition of protected classes so long as the law left companies at risk of frivolous lawsuits.

However, he did not speak for one of the largest members of Missouri’s Chamber of Commerce and Industry. Monsanto, a corporation that scores high marks as one of the best workplaces in terms of LGBTQ equality.

Sarah Baker of the Missouri branch of the ACLU explained why companies like Monsanto want Missouri to add protections: it’s good for business.

“The reason they do this isn’t just because it’s fair and just because it’s right,” Baker said. “They also find it profitable.” Baker testified 90 percent of Fortune 500 companies prohibit discrimination on the grounds of sexual orientation.

Given that the bill is stuck in committee with the session scheduled to end May 12th, Republican Rep. Kevin Engler is offering a way out: the House can pass LGBT protections by adding the measure to a separate bill pertaining to employment discrimination law.

“Quite frankly, that bill is so egregious I would hope that we would not,” countered House Minority Leader Gail McCann Beatty, a Kansas City Democrat in favor of the Missouri Nondiscrimination Act, or MoNA. “There is likely going to be some discussion of MoNA as we discuss that bill, but that is not the bill that I want [LGBT rights] attached to.”

And the clock is ticking.

EDITOR’S NOTE: An earlier version of this report was published under a different headline.

Watch this week’s LGBTQ news you can use: Chechnya, Roy Moore, adoption & more