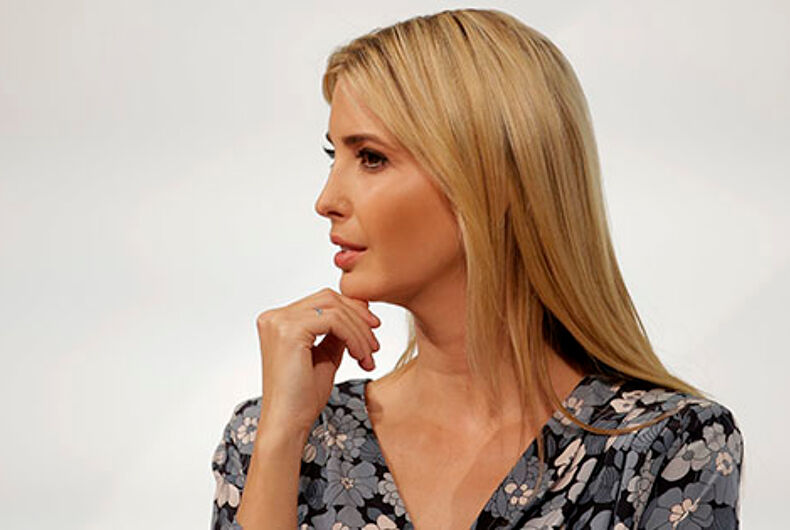 Women booed, hissed and loudly groaned as Ivanka Trump, one of the daughters of President Trump, defended his record on women at her first international outing as his unpaid adviser: “I’m very proud of my father’s advocacy,” she said, calling the president “a tremendous champion of supporting families and enabling them to thrive.”

As you can see in the video from the Washington Post, German Chancellor Angela Merkel, who invited Trump to the W20 Summit, looked surprised when she turned to watch the crowd as they responded to the First Daughter’s words with the sounds of disapproval.

“You hear the reaction from the audience,” said moderator Miriam Meckel. “I need to address one more point — some attitudes toward women your father has displayed might leave one questioning whether he’s such an empowerer for women.”

Meckel, the editor in chief of Germany’s WirtschaftsWoche, had been tough on Trump from the start, as Politico reported.

“The German audience is not that familiar with the concept of a first daughter. I’d like to ask you, what is your role, and who are you representing, your father as president of the United States, the American people, or your business?”

That put Trump on the spot. She sat next to Christine Lagarde, the managing director of the International Monetary Fund, and one seat down from Merkel. Queen Maxima of the Netherlands also sat on the panel.

“Certainly not the latter,” Trump replied, quickly. “I’m rather unfamiliar with this role as well… It has been a little under 100 days, and it has just been a remarkable and incredible journey.”

Trump did not directly comment on accusations her father had sexually harassed and made unwanted advances to women, but was quick to blame his favorite enemy: the press.

“I’ve certainly heard the criticism from the media, that’s been perpetuated,” she said, drawing laughs from the audience.

Trump went on to cite her own personal experience and that of the “thousands” of women have worked with and for her father in the private sector, saying they “are a testament to his belief and solid conviction in the potential of women and their ability to do the job as well as any man.”

“He encouraged me and enabled me to thrive,” Trump said. “I grew up in a house where there was no barrier to what I could accomplish beyond my own perseverance and my own tenacity.”

She said there was “no difference between me and my brothers. And I think as a business leader you saw that, and as a president you will absolutely see that.”

Trump’s appearance Tuesday was one stop on a three-day trip, in which she is touring a vocational training center operated by the Siemens corporation, and a visit to Berlin’s memorial to the 6 million Jews murdered by the Nazis during World War II. Trump converted to Judaism herself ahead of her 2009 marriage to Jared Kushner.

A Methodist bishop is on trial because she’s a lesbian