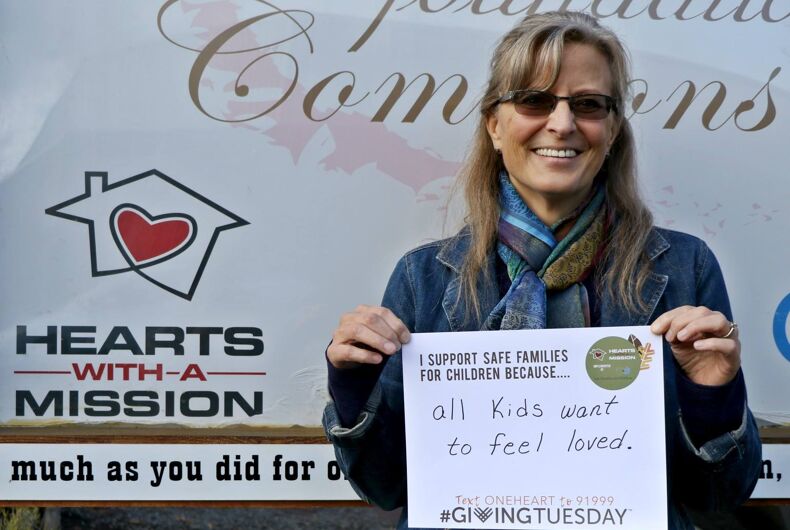 Photo: Hearts With A Mission

A faith-based youth homeless shelter is facing backlash after it declined a $3,000 donation from a charity performance of the Portland Gay Men’s Chorus.

The Oregon shelter Hearts With A Mission turned down the funds in an effort to avoid controversy, but that effort backfired when local media caught wind of the reason for the rejection.

“We regret the outcomes of turning down the funds from Portland Gay Men’s Chorus event,” Hearts With A Mission said in a statement. “We recognize this situation should have been handled differently. Hearts With A Mission made this decision in an attempt to keep the focus on the youth services we provide and avoid undo [sic] controversy.”

Hearts With A Mission executive director Kevin Lamson told the Daily Courier that he can’t help the perceptions of others, but he does have to take them into consideration.

“By branding something with our logo, we are essentially endorsing it,” he said. “It’s a shame that that factors into how somebody else perceives our organization.”

And then Lamson said something strange. He suggested that if LGBTQ youth saw a negative community response to the donation, they might not seek support from Hearts With A Mission.

“Many of the kids that we’ve worked with have been abused or they are struggling with their own sexual identity,” Lamson said. “If they see in the paper or hear their parents saying that they don’t support our organization anymore, that’s going to have an effect on them and whether they come to us.”

Apparently this concern outweighed the possibility that rejecting the donation would make them look anti-gay and therefore seem unsafe to LGBTQ youth. The organization’s refusal to accept those funds has already called into question the shelter’s ability to serve this vulnerable community.

“We are deeply disappointed in the Mission’s statement,” said Mario Fregoso, executive director of Lotus Rising Project, which serves LGBTQ youth in the region. “We know that LGBTQ youth comprise approximately 40 percent of all homeless youth, which means the mission, which is the only youth shelter in Jackson and Josephine counties, is serving LGBTQ youth. Whether you are a faith-based or secular group, they have a moral responsibility to affirm the identities of youth and support them in becoming healthy, thriving adults. Their statement sends a horrible message to LGBTQ young people, many who are already struggling, that something is wrong with them. We believe that every child is born perfect.”

But Hearts With A Mission says its rejection of the funds is not a reflection of how they treat LGBTQ youth.

“We did not mean to disrespect the Portland Gay Men’s Chorus or to the LGBTQ Community,” the group said in a statement. “Hearts With A Mission believes in helping all youth, regardless of sexual orientation, race, religion, or ethnicity. We meet every youth where they are at and welcome them into our shelters.”

“The entire time I lived at Hearts I was openly out as gay. Hearts with a mission, Kevin Lamson, and every single person that works for or has worked for Hearts has treated me and all the other kids like me, kids who identify as LGBTQ, with respect and kindness and love. Which is the exact way they treat everyone,” wrote Diana Ellis, who said she stayed at the shelter for just under a year when she was 16. “I think people have it set in their minds that christians hate gay people, and that is the assumption that this article is playing off of. However, the truth of how this organization loves, cares for and gives hope to all youth- LGBTQ included- is in line with how Jesus loves: fully.”

What makes it all the more perplexing, is that Hearts With A Mission sought additional money from the City of Grants Pass shortly after rejecting the freely-given funds. And while the city council approved this request, one of the councilors who voted against it said that while he supports the shelter’s mission, he doesn’t believe in giving money to a group that has rejected funds from someone else.

“The core issue for me was that they’re asking the city taxpayers for money, yet turning down a viable donation….None of their concerns made any sense to me, to be quite honest,” City Councilor Tyler Flaming told the Willamette Week. “If you’re somebody that needs help from this organization and you have the ability to go to this shelter, I don’t think the first thing you’re doing is asking for the donor list. It makes absolutely no sense to me at all.”

Flaming said he’s not trying to promote any kind of agenda, but speculated that the shelter’s leadership must not be comfortable with supporting LGBTQ people

“When you’re not accepting money because it was raised from a concert of gay men that’s just too much for me,” Flaming said. “It’s too crazy. Crazy town.”

The Portland Gay Men’s Chorus responded to the controversy in a vague but classy statement highlighting the positive outcomes of their fundraising concerts across the state, and noting that the funds from the Grants Pass show ultimately when to support the Maslow Project.

“Last month we were honored to perform to a sold-out house in Grants Pass at the invitation of the Newman United Methodist Church in support of the Maslow Project, a local organization serving homeless youth in Josephine County. The Portland Gay Men’s Chorus remains deeply appreciative of the kind hospitality we received from the Newman United Methodist Church and the community in Grants Pass,” PGMC Executive Director Richard Yung said in a statement. “Whatever controversy may have surfaced since, what is most important to us is that on one evening, a community came together united by music. We look forward to performing there again in the future.”

Hearts With A Mission said it plans to hold a press conference on Tuesday.

Watch this week’s LGBTQ news you can use: Chechnya, Roy Moore, adoption & more