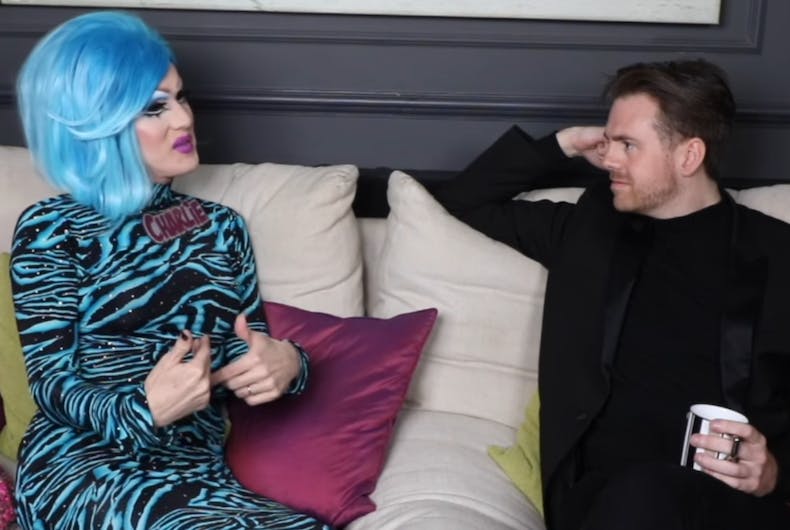 Charlie Hides, a contestant on season 9 of RuPaul’s Drag Race, talked about why he stopped doing a character in blackface in an interview with Andy West.

I haven’t seen any videos of Charlie Hides before, and I was surprised to learn that Charlie performed in blackface for 14 years for a character called “Laquisha Jonz.”

After complaints and a change.org petition, she reconsidered what she was doing and stopped.

Charlie recounted the story to West:

I wasn’t banned. I chose to voluntarily stop doing a character that I had done for 14 years without a single complaint. Someone had seen a poster, hadn’t seen the character, didn’t know anything about the character’s history, the back story or anything.

I apologized profusely[…] To continue would have been an act of protest. Basically I changed the wig and a little bit of the makeup.

A quick search of her YouTube channel did not turn up any Laquisha Jonz videos.

West seemed to start to ask Charlie if she could describe or perform part of the act, and she immediately cut him off. “Can we not continue this?” she responded.

West said that it “must have hurt” to be accused of racism, and Charlie had the obvious response that a lot of white people don’t understand.

Being told that something you’re doing is hurting others is painful to hear, true. What white people often don’t get is that that pain is nothing compared to the pain of being on the receiving end of centuries of institutionalized racism.

But Charlie understood. She took down the videos, stopped performing in black face, and gave a real apology.

It would have been great if Charlie had never performed in blackface, but, well, white people’s understanding of the world is a product of a racist culture and people make mistakes. When she knew better, she did better, and that’s really the best that we can expect of one another.

How did a Republican congressman earn cheers from angry liberals at a town hall?