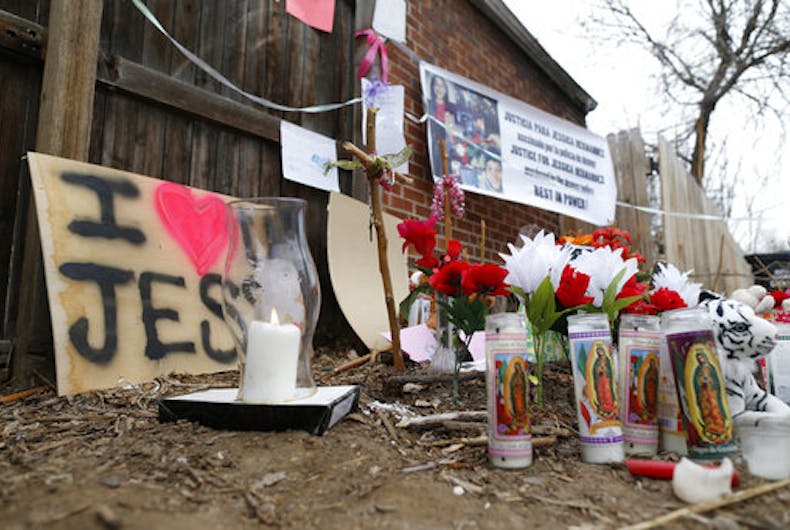 FILE - In this Jan. 31, 2015, file photo, signs and votive candles stand at a makeshift memorial as it grows at the site of a fatal police shooting in an alleyway in northeast Denver. Denver Police officers killed a 17-year-old girl when she allegedly drove a stolen vehicle at the officers. On Wednesday, April 12, 2017, Denver officials announced that the city has agreed to pay nearly $1 million to the family of teenager. Photo: (AP Photo/David Zalubowski, File)

Denver officials announced Wednesday that they reached a settlement to pay nearly $1 million to the family of a teenager who was shot and killed by police while driving a stolen car toward an officer in 2015.

Besides the $999,999 payout to the parents of 17-year-old Jessica Hernandez, the city also pledged to invite the family to appoint a representative to a committee advising police on use-of-force policy and do outreach meetings with the Latino and LGBTQ communities. The City Council still must approve the deal over the death of Hernandez, who was gay.

The Jan. 26, 2015, shooting came shortly after the officer-involved deaths of Michael Brown in Ferguson, Missouri, and Eric Garner in New York. It led to protests, including one in which demonstrators poured paint on a memorial to slain officers.

Hernandez was sleeping in a Honda Civic in a residential alley with four other friends after a night out when police were called to check on the suspicious car. They discovered it was stolen.

Police say Hernandez at first backed up and moved forward slowly, then accelerated toward Officer Gabriel Jordan, who feared he might be run over and killed. He and Officer Daniel Greene fired into the car.

None of the other teens or the officers were hurt.

It marked the fourth time in seven months that Denver police had shot at a moving car. In response, the department changed its policy to bring it in line with most police agencies, advising officers to fire at moving cars only if someone inside is firing at them. Under the settlement, police will keep training officers in that new policy.

Even though officers were following policy at the time, that “does not negate the pain felt by all involved,” Police Chief Robert White said.

Denver has fought lawsuits over police shootings and excessive force in the past, but this case was handled differently. Officials held several meetings with the family, including one with Mayor Michael Hancock that the Hernandez family lawyer, Qusair Mohamedbhai, described as “tearful.”

“It takes courage for the government to do what they have done in this case,” he said.

After the settlement was announced, Jessica’s mother, Laura Sonia Rosales, spoke tearfully about her daughter, whom she described as the “sun” of her home.

Speaking in Spanish, she said Jessica loved to help others and fight for their rights. With the money from the settlement, Rosales said, she might be able to something more to help others now.

‘Drag Race’ queen talks about why she stopped performing in blackface

Can a gay New York City councilman force Trump to release his taxes?