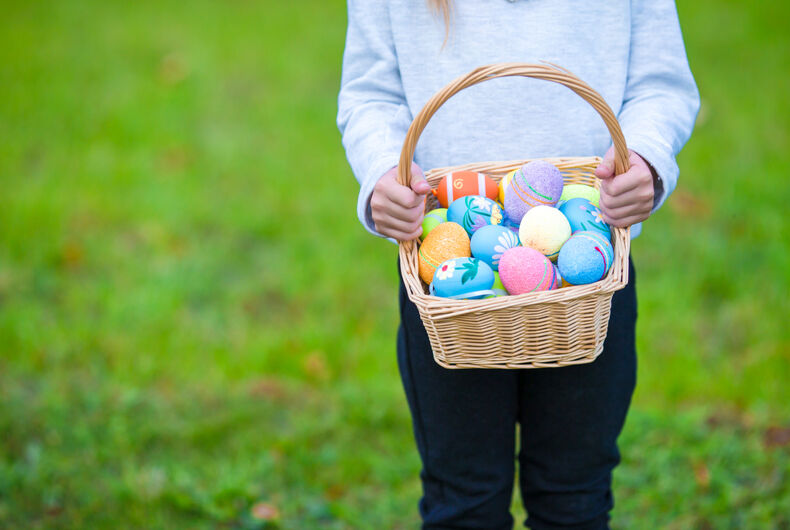 "What did you get for Easter?" "Oh, just another basket of Christian privilege."Photo: Shutterstock

As spring peers forth from the soil and tree limbs, the annual Easter Egg Roll, sponsored by the President of the United States and the First Lady, thrills elementary and pre-school age children each year.

Also, in school classrooms throughout the country, students and their teachers dip hardboiled eggs into brightly colored dyes, and display Easter eggs of pink, yellow, blue, green, red, and lavender. Some students adhere bunny, baby chick, rainbow, or angel decals to their Easter eggs. Some paint flowers or clouds; some sprinkle glitter of silver or gold.

An excitement wafts through the classroom as students imagine sharing their treasures with parents or caregivers, as teachers reward the good work of their charges with delicious gleaming chocolate bunnies. A palpable excitement fills the air in anticipation of Easter Sunday as children adorn classroom bulletin boards with images of the season.

Many people (most likely the majority) consider these events, played out in Washington, D.C., and in some schools in the United States, as normal, appropriate, and joyous seasonal activities. Upon critical reflection, however, others experience them as examples of institutional (governmental and educational) (re)enforcements of dominant Christian standards and what is referred to as “Christian privilege,” though presented in presumably secularized forms.

They represent some of the ways in which the dominant group (in this instance, Christians) reiterates its values and practices while marginalizing and subordinating those who do not adhere to Christian faith traditions.

As an educator of pre-service teachers in the university, I am gratified to find that an ever-increasing number of Colleges of Education include instruction on issues of power and privilege related to our socially constructed identities. We know that teachers must thoroughly come to terms with their social positions (“positionalities”) — the intersectional ways in which they are privileged as well as how they have been the targets of systemic inequities — and the impact this makes on their students.

Depending on our multiple identities, society grants us simultaneously a great array of privileges while marginalizing us based solely on these identities. Inspired by Peggy McIntosh’s pioneering investigations of white and male privilege, we can understand dominant group privilege as constituting a seemingly invisible, unearned, and largely unacknowledged array of benefits accorded to members of dominant groups, with which they often unconsciously walk through life as if effortlessly carrying a knapsack tossed over their shoulders.

The concept of “hegemony” describes the ways in which dominant groups successfully disseminate dominant social realities and social visions in a manner accepted as common sense, as “normal,” as universal, and as representing part of the natural order, even at times by those who are marginalized, disempowered, or rendered invisible by it.

Christian hegemony can be defined as the overarching system of advantages bestowed on Christians. It is the institutionalization of a Christian norm or standard, which establishes and perpetuates the notion that all people are or should be Christian, thereby privileging Christians and Christianity, and excluding the needs, concerns, religious cultural practices, and life experiences of people who are not Christian. At times subtle and often overt, Christian hegemony is oppression by neglect, omission, erasure, and distortion, and also by design and intent.

I caution us, though, not to conceptualize dominant group privilege monolithically, for we must factor into the equation issues of context and intersectionality of identities. As there is a spectrum of Christian denominations and traditions, for example, so too is there a hierarchy or continuum of Christian privilege based on 1) historical factors, 2) numbers of practitioners, and 3) degrees of social power. I contend, therefore, that we need to view forms of privilege along a continuum or spectrum rather than conceiving them as binary opposites.

As educators raise issues of dominant group privilege, and pose questions of power and domination in our classes and in the larger society, invariably we experience resistance. I understand this only too well, not only as an educator but also in my personal development.

Though I was rather slow to come to consciousness how my defense mechanisms prevented me from accepting and taking responsibility for the unearned benefits granted me by my social identities, over the years, I have understood the process from denial to acceptance to committing to ensure equity among people of all social identities. Raising issues of privilege remain difficult, but are necessary if our country is to progress and redress the mistakes of the past.

I have researched and written much on the topic of Christian privilege, and I am sometimes asked to present my research and lead discussions on the topic in college classrooms and at conferences. Last year, while still teaching at my Midwestern university, one of my colleagues in the Social Justice concentration asked me to lead a discussion in her graduate “Pedagogy of Oppression” class.

As I went over my PowerPoint presentation, and engaged students in an animated discussion, I noticed two students in particular, bodies rigid, arms folded across their chests, a sneer on their faces. As we progressed, one of the students, an African-American man, suddenly changed his expression. His body relaxed. The facial sneer softened, and a shiny glint emanated from his eyes.

A few minutes later, he raised his hand and said:

“You know, Dr. Blumenfeld, up to this point in the discussion, I found the whole topic of Christian privilege to be unbelievable and frustrating. As a black man in the United States, before I came into this room today, I saw myself as having no social identity privilege. But then it occurred to me, for the first time I now understand what white people feel – including their rejection of the topic and their denial – whenever I bring up and teach about white privilege. That’s exactly how I felt about Christian privilege. Now I get it.”

By challenging dominant group privilege and hegemony, we do not condemn or even contest Christianity, or whiteness, or maleness, or heterosexuality, or physical or mental abilities, and so on per se, but, instead, we are interrogating the unearned and automatic privileges that come with these social identities.

Though we can never fully quantify privilege, by discarding the bifurcated binary perspective while charting privilege along a continuum taking into account context and identity intersectionality, we will come to a fuller and deeper awareness of issues of power and privilege, marginalization, and oppression as we work toward a more socially just society and world.