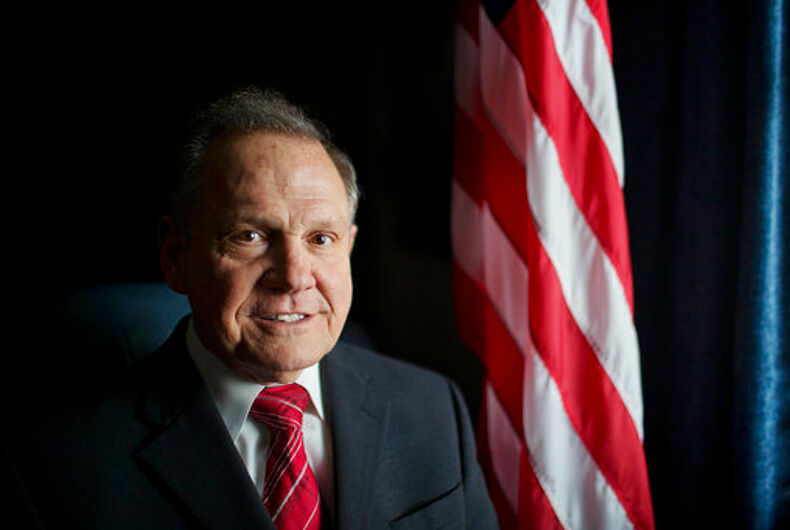 FILE - In this Feb. 17, 2015, file photo, Alabama Chief Justice Roy Moore poses for a photo in Montgomery, Ala. Moore scheduled a news conference Wednesday, April 26, 2017, on the steps of the Alabama Capitol to announce his plans for the future.Photo: (AP Photo/Brynn Anderson, File)

The fiery Republican jurist, who was suspended from the bench on accusations that he urged defiance of the landmark U.S. Supreme Court decision allowing gays and lesbians to marry, made the announcement in a news conference on the steps of the Alabama Capitol.

Repeating familiar themes from his judicial and political career, Moore said the country is being gripped by immorality and damaged by judges and politicians who stray from a strict interpretation of the Constitution.

He was surrounded by about two dozen supporters who waved American flags, a Christian flag and signs from his past campaigns.

Moore, who has been suspended from the bench since September, said he has submitted resignation paperwork to step down as chief justice to seek the post.

He is joining what’s expected to be a crowded GOP primary field in the Aug. 15 primary.

Moore has twice won statewide elections for chief justice, and twice been removed from those duties by a judicial discipline panel. His other election bids have fallen flat. In 2010 he finished fourth in the Republican primary candidate for governor.

The U.S. Senate seat is currently held by former Alabama Attorney General Luther Strange. He was appointed by then-Gov. Robert Bentley who resigned this month amid fallout from an alleged affair with a top staffer. Bentley had planned to hold the Senate election in 2018, but the state’s new governor, Kay Ivey, moved it up to this year, setting off what’s expected to be a four-month demolition derby among Republicans, the dominating political party in the state.

Moore, now 70, was a little known judge in Etowah County in the 1990s until the American Civil Liberties Union unsuccessfully sued him over a handmade wooden Ten Commandment plaque he hung on his courtroom wall. The fame helped catapult him to the office of chief justice in the 2000 election.

The Court of Judiciary, which disciplines judges, removed Moore as chief justice in 2003 after he disobeyed a federal judge’s order to remove a boulder-sized Ten Commandments monument that he installed in the rotunda of the state judicial building. He called the order unlawful, saying he had a right to “acknowledge God.” He was re-elected as chief justice in 2012, a victory he described as a vindication.

In a Jan. 6, 2016 memo to probate judges Moore wrote that a 2015 Alabama Supreme Court order to refuse marriage licenses to gay couples remained in “full force and effect.”

His memo came six months after the highest court in the nation ruled that gays and lesbians have a fundamental right to marry.

The judiciary panel in September suspended Moore for the remainder of his term, saying he had violated judicial ethics by urging probate judges to refuse marriage licenses to gay couples.

Moore denied the charge of urging defiance, and said he was only giving a status update on the 2015 state order. However, he also called his ouster a politically motivated effort from “homosexual and transgender groups” because of his opposition to gay marriage.

Moore has been a divisive figure inside and outside of Alabama. He enjoys a loyal following of social conservatives but has also butted heads with some in the state GOP’s business wing.

“The people of Alabama have watched Judge Moore, time and again, stand up to the federal courts and defend the Godly principles that have made this nation great. … Alabama will become ‘Ground Zero’ in the political and cultural war,” Dean Young, a longtime Moore supporter, told The Associated Press ahead of the announcement.

Moore told supporters Wednesday, “The foundations of the fabric of our country are being shaken tremendously. Our families are being crippled by divorce and abortion. Our sacred institution has being destroyed by the Supreme Court.”

Richard Cohen, president of the Southern Poverty Law Center, which filed the complaints that led to Moore’s removal, calls Moore the “Ayatollah of Alabama” who has been unable to separate his personal religious beliefs from his judicial responsibilities.

While Moore is best known for his religious stances, he’s also been an outspoken advocate of sentencing reform. In a 2015 court writing, he criticized a sentence of a life without parole for a 76-year-old man who grew marijuana for personal use.