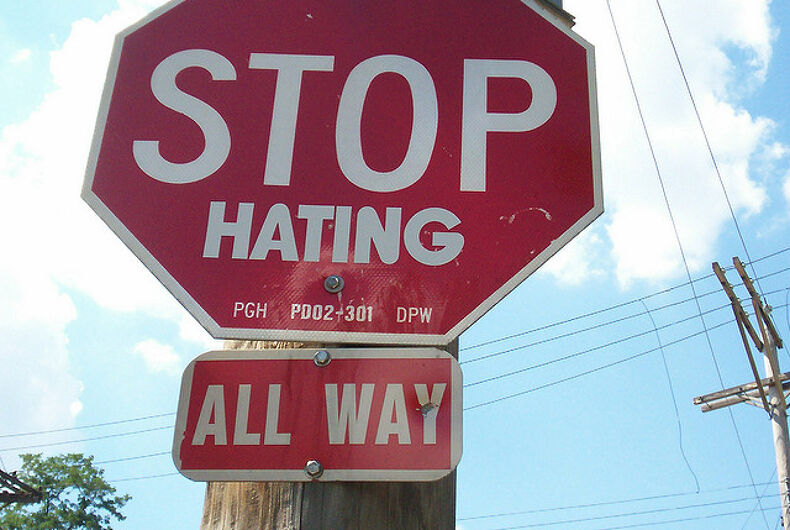 LUCEDALE, Miss. (AP) — In the waning days of President Barack Obama’s administration, supporters of LGBT rights hailed the first federal hate crime conviction for the killing of a transgender woman in Mississippi. With President Donald Trump now in office, they worry about the future of such prosecutions.

Trump’s new attorney general, Jeff Sessions, opposed the 2009 hate crime law when he was a U.S. senator, saying it was overly broad and he thought it was unnecessary to include further protections for gay and transgender people. During his January confirmation hearing, Sessions told fellow senators they “can be sure I will enforce” the law, but some observers wonder about his commitment.

“We really might be looking at a new day under Sessions, and that has huge implications for how the federal government is going to treat violence that is absolutely rampant in the transgender community,” said Jordan Woods, a University of Arkansas law professor who studies LGBT legal issues.

Sentencing in the Mississippi case is May 15. With a plea agreement in place, it’s unlikely Sessions could change the strategy in this prosecution.

Joshua Vallum, an ex-convict and top-ranking gang member, faces life in prison without parole for killing 17-year-old Mercedes Williamson, who was born male but transitioned to a female. Prosecutors say Vallum, 29, and Williamson dated and that he killed his transgender girlfriend because he worried fellow gang members would discover their relationship and kill both of them because gay sex was strictly forbidden by the Latin Kings gang.

“We waited for many years for the government to finally deploy that law,” Levasseur said.

Hate crimes have historically been a priority for the FBI and Justice Department. Investigations are typically initiated by the FBI and the attorney general doesn’t need to sign off on each prosecution.

Six Democrats in Congress wrote to Sessions on March 10 to ask the Justice Department to investigate as hate crimes the deaths of seven transgender women this year, including another one in Mississippi.

Crimes motivated by a loathing of sexual orientation or race will often be prosecuted under state hate crime charges, but those vary. Mississippi, for example, doesn’t include crimes against transgender people.

Usually defendants will also face charges such as assault or murder, but people are more likely to be convicted in federal court and can sometimes face longer sentences.

In Vallum’s case, he pleaded guilty to murder in state court and was sentenced to life in prison, but with a chance of parole. He could get life in prison without parole for his federal guilty plea.

“There’s a lot of variability in the willingness of state and local jurisdictions to prosecute,” said Rebecca Stotzer, a University of Hawaii professor who has studied violence on LGBT people.

Vallum previously served time for a fake bomb threat at a church. While imprisoned, he joined the Latin Kings gang, going by the name King Chaos. After his release, Vallum met Williamson online and they dated for months in 2014.

In his defense, Vallum initially told sheriff’s deputies and later The Sun Herald newspaper that he found out that Williamson had a penis on May 30, 2015 — moments before he killed her. He said he “blacked out” and doesn’t remember the crime, a variation of what’s known as a “gay panic” or “trans panic” defense.

Federal prosecutor Julia Gegenheimer said during Vallum’s plea hearing in December that he began planning to kill Williamson after a friend called him May 28 to say he’d discovered her identity.

Vallum lured Williamson into a car in Alabama and drove her 50 miles (80 kilometers) to his family home near Lucedale, Mississippi, prosecutors said. He shocked her with a stun gun and stabbed her in the body and head with a pocketknife. When she tried to run into the woods, he chased her down and bashed her head with a hammer.

Lesbian, gay, bisexual and transgender rights advocates say heinous attacks like this one should be prosecuted as hate crimes because they spread fear among their community.

Hayley Seymour is a transgender woman who led a vigil for Williamson in Mobile, Alabama, after her death. Seymour didn’t know Williamson, but she acted because she grew up nearby.

Williamson had left home, had a tenuous relationship with her parents, and was struggling with a drug habit. She deserved better, Seymour said.

“I know how easily violence can happen and how easily it can be swept under the rug,” she said.

She moved to the Atlanta area because being transgender in Alabama was “a nightmare.”

Despite fears that the hate crime law would be overused, prosecutions under Obama’s administration were relatively few. An Associated Press analysis using data gathered by the Transactional Records Access Clearinghouse at Syracuse University show that 47 people nationwide have been prosecuted using the law, with 37 convictions.

Another 300 people were referred for prosecution, but hate crimes charges were never filed. In at least half those cases, there wasn’t enough evidence or prosecutors couldn’t prove intent, a key threshold.

Levasseur said that whatever the difficulties, the law protecting LGBT people makes an important statement.

“This law is meant to send the message back that these lives matter,” he said.