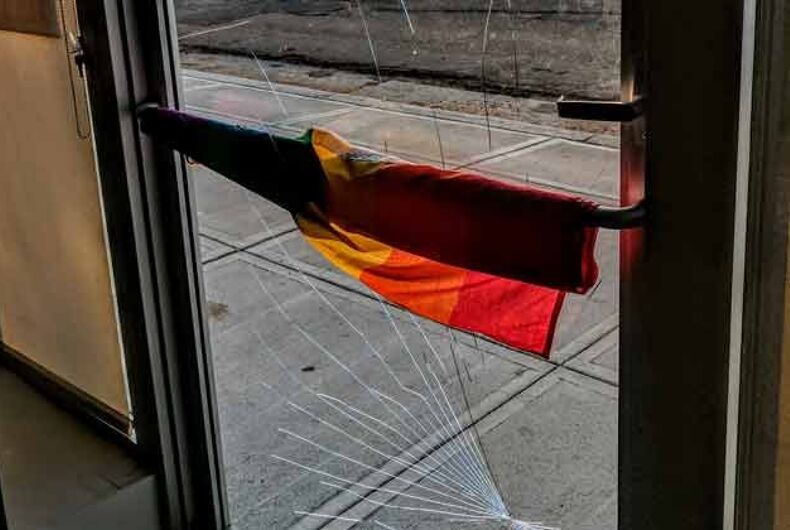 The offices of Garden State Equality and Equality Florida were both vandalized this past week.

On Saturday at around 2 p.m., two unidentified individuals smashed the glass door of Garden State Equality’s Ashbury office. A rainbow flag hangs on from the inside of that door.

Executive director Christian Fuscarino was in his office at the time but did not hear anything since the window is double-paned.

Fuscarino told New Jersey 101.5, “We have surveillance footage and fully expect the police to investigate it as an attack on all LGBT people.”

In a statement, Senator Cory Booker (D-NJ) condemned the act, “I condemn acts of hate against all communities, whether Jewish, Muslim or LGBT, in the strongest possible terms. We must stand united with love against the ‎shadow of hate that has been cast over our great nation‎.”

Last Thursday, someone threw a brick threw a window at the Orlando office of Equality Florida. Deputy Development Director Michael Farmer said that no one was working at the office when the incident occurred.

Farmer told the Orlando Sentinel that he doesn’t believe the incident was an accident, “We see this national climate where minority businesses and worship centers are getting bomb threats and being vandalized, and I hate to think that this is a piece of that but it’s obvious someone selected our office and did this.”

Ellen will host a new game show on NBC

French citizens are begging Barack Obama to run for President