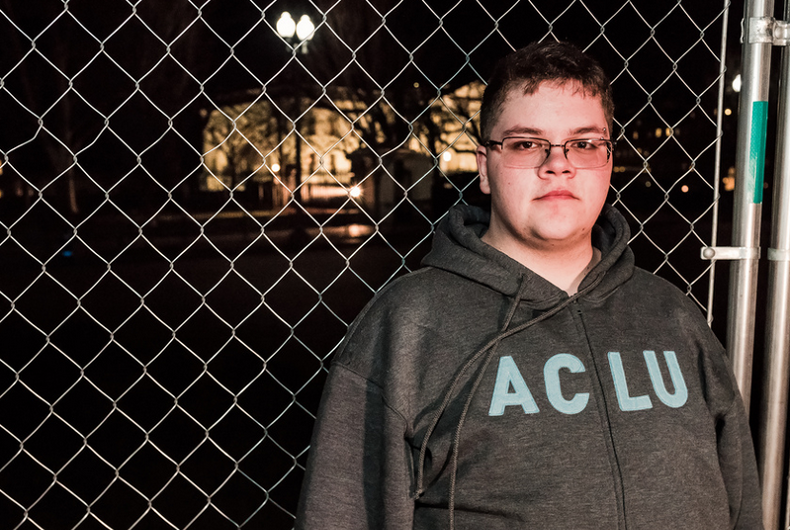 Trump’s “Justice” Department under Jefferson Beauregard Sessions disputed this claim and argued that the issue should be decided separately within each state. But as we know, the demand for “states’ rights” throughout our history has been nothing less than a codification for the states’ rights to discriminate.

On Monday, March 6, the U.S. Supreme Court announced that it would not hear the case of Gavin Grimm, a Virginia trans male high school student who has sued his school district for the right to enter school facilities corresponding with his gender identity. The Court’s decision vacates a lower court’s ruling in Grimm’s favor, and now the case goes back to the court of appeals for retrial.

In her pioneer book, Homophobia: A Weapon of Sexism, Suzanne Pharr describes a series of elements she finds common to the multiple forms of oppression. Such elements include what she refers to as a “defined norm” and a “lack of prior claim,” among many others.

Pharr explains a “defined norm” as “a standard of rightness and often of righteousness wherein all others are judged in relation to it. This norm must be backed up with institutional power, economic power, and both institutional and individual violence.”

Another way “the defined norm manages to maintain its power and control” and kept exclusive is by what Pharr refers to as the element or system of “lack of prior claim.”

This, according to Pharr, “means that if you weren’t there when the original document (the Constitution, for example) was written, or when the organization was first created, then you have no right to inclusion.[…] Those who seek their rights, who seek inclusion, who seek to control their own lives instead of having their lives controlled are the people who fall outside the norm.[…] They are the Other.”

In the original and un-amended version of the U.S. Constitution, for example, since only male land owners of European-heritage had the right to vote, all Others, including women and people of color (those outside the defined norm and who lacked prior claim) had to fight long and difficult battles against strong forces to gain access to the voting booth, often under the threat of and actual violence.

Some who continue to oppose marriage equality for same-sex couples claim that this would undermine the sanctity of marriage, and possibly lead to the destruction of society, often using religious sanctions as their justification.

For example, responding to Vermont’s civil unions legislation in 2000, Catholic Cardinal Bernard Law reflected the opinion of a number of New England Cardinals and Bishops:

The Legislature of the State of Vermont, by passing the Civil Unions Bill [countering the defined norm and lack of prior claim], has attacked centuries of cultural and religious esteem for marriage between a man and a woman and has prepared the way for an attack on the well-being of society itself [by these Others].

What then, in the next place, will be the effect of this fundamental change [countering a lack of prior claim] when it shall be established? The obvious answer is, that it will destroy Christianity and civilization in America [by these Others who are outside the defined norm].

Cardinal Law and Professor Dabney engaged in similar dire predictions, but, and here is the key, they are referring to two different events – the Cardinal referred to marriage for same-sex couples, Dabney, who lived from 1820-1898, referred to women’s suffrage – but they forewarned similar consequences: the destruction of the family and civilization as we know it.

The Church of Jesus Christ of Latter-Day Saints provides an example on the institutional level. LDS President, Brigham Young, instituted a policy on February 13, 1849, emanating from “divine revelation” and continuing until as recently as 1978, forbidding the ordination of men of African descent [outside the defined norm] from the ranks of LDS priesthood.

In addition, this policy prohibited black men and women of African descent from participating in the temple endowment and sealing [lacking in prior claim], which the Church dictates as essential for the highest degree of salvation. The policy likewise restricted black people from attending or participating in temple marriages.

Young attributed this restriction to the so-called sin of Cain, Adam and Eve’s eldest son, who killed his brother Abel: “What chance is there for the redemption of the Negro? [lack of prior claim],” stated Young in 1849 following declaration of his restrictive policy. “The Lord had cursed Cain’s seed with blackness and prohibited them [the Others] from the Priesthood.”