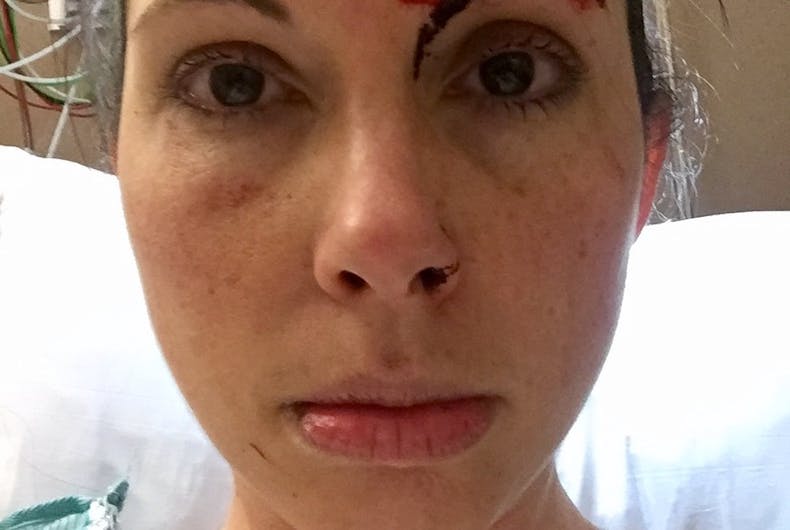 Marathon runner Kelly Herron was on her fourth mile of a long run last week when she stopped to use a public restroom. A cisgender man was hiding in a stall and attacked her, and she fought to get out. With the help of others, she managed to lock him in the bathroom until police arrived.

My biggest running nightmare became reality- 4 miles into my long run Sunday afternoon, I stopped to use the restroom and was assaulted by a man hiding in a stall (that is my GPS in red lines). I fought for my life screaming("Not today, M**F**er!"), clawing his face, punching back, and desperately trying to escape his grip- never giving up. I was able to lock him in the bathroom until police arrived. Thankfully I just took a self-defense class offered at my work and utilized all of it. My face is stitched, my body is bruised, but my spirit is intact. #fightingchanceseattle #ballard #runnersafety #marathontraining #womensselfdefense #myballard #fightlikeagirl #fightback #dontbeavictim #nottodaymotherfucker #youcantbreakme #instarunners #garmin #garminvivosmarthr

But her traumatic experience didn’t end there. She found out this week that her face and her story were being used to raise funds for the campaign that supports I-1552, a ballot initiative in the state of Washington that would rollback protections of transgender people.

If passed, I-1552 would remove employment, public accommodation, and housing protections based on gender identity in Washington’s 2006 human rights law. The law would allow businesses to set their own policies for bathroom use, even allowing businesses to go so far as to reject corrected birth certificates.

In schools, the initiative would allow students to sue their school for $5000 each time they encounter a transgender person in a bathroom or in a locker room. Schools would be required to enforce bathroom use based on the gender a student was assigned at birth.

Herron says that she does not support I-1552. “I was actually doing pretty well with my mental state, and then I see this and I am so outraged. I have transgender friends. I work with transgender people. They are people. They identify differently and I don’t care where they use the bathroom. When I see a transgender person in the bathroom, we talk about lip gloss,” Herron told KIRO Radio.

The “Just Want Privacy” campaign, which supports I-1552, said in their fundraising message that included Herron’s story, “We cannot be naive and normalize the presence of males in females’ vulnerable spaces.”

The campaign, though, has issued an apology to Herron. “Since many of the volunteers that comprise this campaign are themselves survivors of sexual assault, the last thing we want to do is make anyone feel exploited.”

“I had to fight for my life,” Herron said. “Then I see this newsletter saying this is why we shouldn’t let transgender people use the bathroom. Guess what, he didn’t read the sign that says ‘women.’ He did it anyway. It’s equally illegal if he were a female and hiding in the bathroom and coming out to assault me. Now my face is being used to promote discrimination. This is outrageous. One issue has nothing to do with the other.”