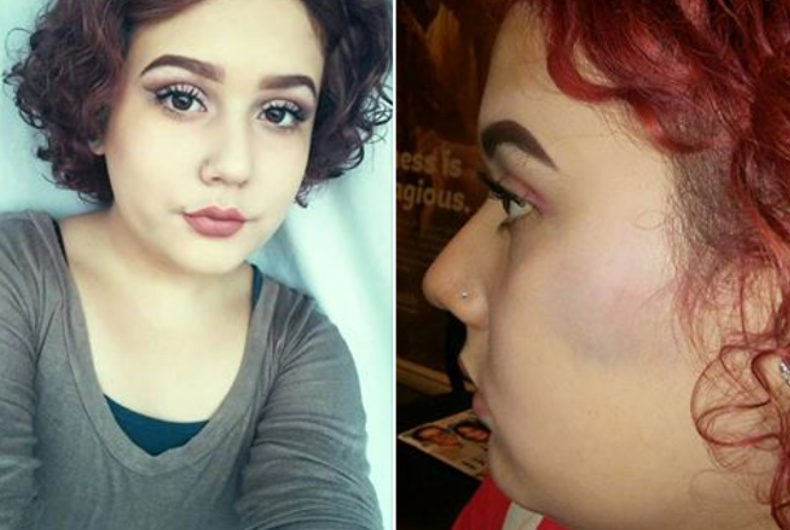 A Washington middle school student who says she was punched in the face by a classmate for being transgender is speaking out about the harassment she faces while her family criticizes the school for inaction.

The alleged assault took place at McLoughlin Middle School in Vancouver, Washington, where 13-year-old Lindsey Smith is a student. She told KPTV that a male classmate called her names and proceeded to punch her in the face, causing a bloody nose and bruising.

“He punched me in the face, right here and right here,” Smith said. “My nose was bleeding. I was holding my nose. The principal told me to ignore it and try not to let it ruin my day.”
KPTV – FOX 12

The assault began to attract media attention after Smith’s aunt posted about it on Facebook.

“Today a male student walked down the halls of the school and was yelling my nieces name and saying ‘she is a boy’ and ‘she has a D***’ and ‘she has to go to the Dr’s to tell them she’s a girl’ and the male student walked up to her and punched her in the face 2 to 3 times!” Smith’s aunt Leslie Goodnight wrote in a viral Facebook post, which includes before and after photos of Smith and has been shared more than 11,000 times.

“It’s really heartbreaking because I want her only worries to be, does this lip stick go with my outfit? Like any other girl,” Goodnight told KPTV. “I don’t want it to be, well, is today the day I get beat up, or is the teacher going to put me down and make me humiliated?”

The girl’s mother, Carrie Smith, told KPTV she was devastated when she heard the news.

“My heart started beating and I started crying. She had texted me, ‘mom, a kid punched me in the face. I think my nose is broken and it’s bleeding really bad,'” she said.

But the assault wasn’t an isolated incident, Smith’s family says. Goodnight noted in her post that her niece has also faced harassment by teachers who have refused to use her chosen name, in violation of state law.

“My sister has gone to the principal on numerous occasions with complaints of not only students seeking out and harassing my niece, but the teachers as well,” Goodnight wrote. “They will call her by her birth name and call her a boy in front of the entire class!! She asks them to please not do that and they tell her they won’t stop! The principal has been no help.”

Washington law requires schools to use transgender students’ chosen names and pronouns and to protect them from harassment.

“We are deeply concerned by this behavior, and I want to assure our students and families that bullying or any other form of harassment is not acceptable and will not be tolerated,” Boeh wrote.

Vancouver Public Schools spokesperson Amanda Richter told The Columbian that the district took “appropriate disciplinary action” against the student who assaulted Smith, but wouldn’t specify what that action is, citing privacy policies. However, she noted that according to district policy, discipline “could fall within a range of actions, including suspension or emergency expulsion.”

“The school did not call the police nor did they suspend the male student because ‘the cameras couldn’t clearly see what happened’ and 3 students claimed that my niece pushed the male student first,” she wrote. “My niece’s nose was bleeding and it may be broke.”

The girl’s mother, Carrie Smith, told The Columbian she has been in frequent communication with the school and is now considering other options for her daughter.

“I’m always in contact with the school, but it doesn’t seem they’re taking it as seriously as they should,” she said. “I just don’t want her to suffer anymore bullying.”