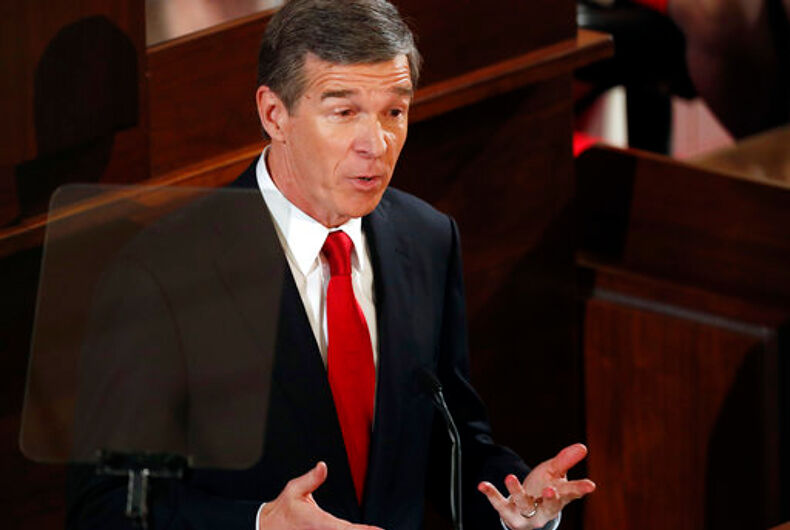 In this March 13, 2017, file photo, North Carolinian Gov. Roy Cooper delivers his first State of the State address to a joint session of the state legislature in the House chamber of the Legislative Building in Raleigh, N.C. Photo: (Chris Seward/The News & Observer via AP, File)

The NCAA will start deciding on locations for its upcoming championships next week and has indicated it will leave North Carolina out of that process if the state hasn’t changed a law that limits LGBT rights by that time.

In a statement Thursday, exactly one year to the day after the law was passed, the sports organization said its committees will begin picking championship sites for 2018-22 and will announce those decisions April 18. The statement also noted that “once the sites are selected by the committee, those decisions are final.”

The NCAA stated its position has not changed since last fall, when it pulled seven championship events from the state because of the law known as HB2.

The law requires transgender people to use restrooms at schools and government buildings corresponding to the sex on their birth certificates. It also excludes gender identity and sexual orientation from local and statewide antidiscrimination protections.

“I have offered numerous compromises and remain open to any deal that will bring jobs and sports back to North Carolina and begin to repair our reputation,” Cooper said in a statement marking the anniversary of the law’s passage. He added that it was time for Republicans “to step up, meet halfway, and repeal HB2.”

Discussions among Republicans appeared to intensify this week.

The North Carolina Sports Association has said more than 130 bids have been submitted to the NCAA, estimating more than $250 million in potential economic impact

House Speaker Tim Moore, R-Cleveland, told reporters Thursday that he and Senate leader Phil Berger, R-Rockingham, have been discussing a bill and sharing the ideas with rank-and-file GOP members. Moore declined to give many details about what’s being discussed but said the legislature wouldn’t back away from keeping in law the ability for state lawmakers only — not local governments — to regulate who can use public restrooms and shower facilities.

“We’re not going to change that,” Moore said.

Moore said some changes can be made to North Carolina law that would make it essentially identical to laws in surrounding states.

“If those changes were made, there would be absolutely no justification for the NCAA, the (Atlantic Coast Conference), anyone else to treat North Carolina any different than those other states,” Moore said.

When asked whether the proposal would satisfy the NCAA, Moore responded: “If I didn’t have pretty good assurances that a number of people thought that there was a pathway to seeing a resolution of these issues, than I wouldn’t be wasting my time doing it.”

Mindful of the NCAA’s deadline, Moore said he expected more discussions among House Republicans next week but wasn’t going to rush colleagues for fear of pushback.

Berger said this week that discussions have been going on but didn’t know if an agreement on the details of any repeal or replacement legislation was any closer.

“It’s going to take compromise from all sides if we’re going to get something,” Berger said Wednesday.

The law also led the ACC to pull its neutral-site championships out of its home state for this academic year, moving its football championship game to Orlando, Florida, and its women’s basketball tournament to Conway, South Carolina. This year’s NBA All-Star game was moved from Charlotte to New Orleans, and some businesses halted expansions and musicians canceled concerts in the state.

Trans wrestler wins right to compete against other boys, but not at school