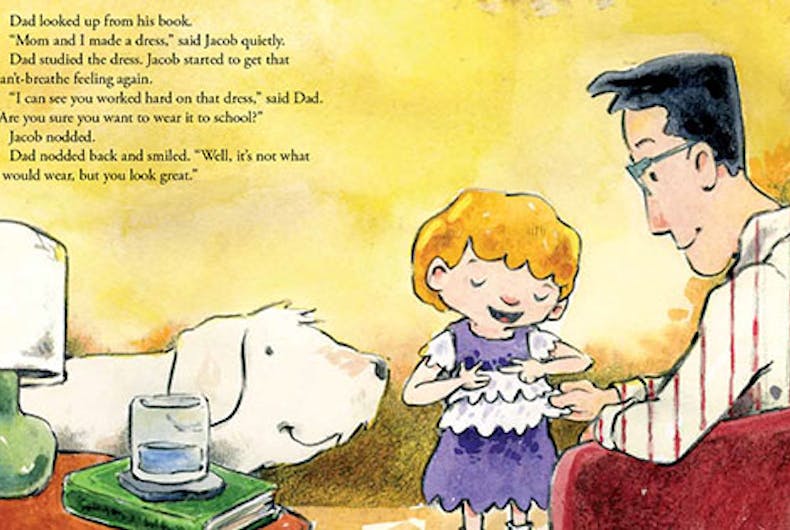 Officials in the Charlotte-Mecklenburg school district have pulled “Jacob’s New Dress” a transgender-friendly children’s book from its anti-bullying curriculum, under pressure from Republican lawmakers and the bigots at the North Carolina Values Coalition.

The picture book about a boy who likes to wear dresses had been selected to be introduced in four elementary schools until a teacher complained to GOP legislators, who flew into a fury.

Charles Jeter, the district’s government liaison, told the Charlotte Observer he emailed about two dozen Republican legislators to say district officials had agreed to pull the book and substitute “Red: A Crayon’s Story,” about a crayon that looks red, but sees himself as blue.

“I wanted to reassure them that we had heard them and we were making that change,” Jeter, a former Republican state representative who resigned last summer, told the paper.

The introduction of Sarah and Ian Hoffman’s book angered those who view lessons of respect of different people as an invasive attempt to teach values they reject on religious grounds.

“The purpose of our elementary schools is to teach writing, reading and arithmetic, not to encourage boys to wear dresses,” Tami Fitzgerald of the North Carolina Values Coalition told the Observer Tuesday. “These lessons found in the ‘Jacob’s New Dress’ and ‘My Princess Boy’ and other transgender curriculum are not appropriate for any child whose parents support traditional family values.”

Now, just as the state marks one year since House Bill 2 was enacted, the Charlotte district is preparing to add sexual orientation and the phrase “gender identity/expression” to its school multiculturalism policy. That means teaching children about race, religion and national origin, according to the newspaper. The proposed new policy will be presented at a public hearing Tuesday. The Observer noted the idea is to “intentionally incorporate diversity throughout the curriculum, instruction and professional development.”

It’s worth noting that the Observer itself showed bias in its reporting on this controversy, in using the term “dress like a girl” for the character Jacob, and in the words chosen to portray those who are not closed-minded about gender identity: “some” and “nontraditional:”

For some families, open support of children with nontraditional gender identities or sexual orientation comes as welcome affirmation of young people who are more likely to be bullied and commit suicide.

Rodney Tucker, executive director of Charlotte’s Time Out Youth program, told the paper his group is working with school officials on a pilot project called the Welcoming Schools program. It includes both “Jacob’s New Dress” and “Red: A Crayon’s Story” on its reading list, and was designed by the national Human Rights Campaign to help elementary schools become “LGBTQ-inclusive” and “gender-expansive.”

The Values Coalition has its own agenda. According to the Observer, shortly after “Jacob’s New Dress” was shelved, the Values Coalition sent a fund-raising email depicting the CMS logo in rainbow colors, urging supporters to email the school board and “put a stop to this privacy-invading political correctness.”

Transgender woman murdered in Baltimore is 8th victim this year