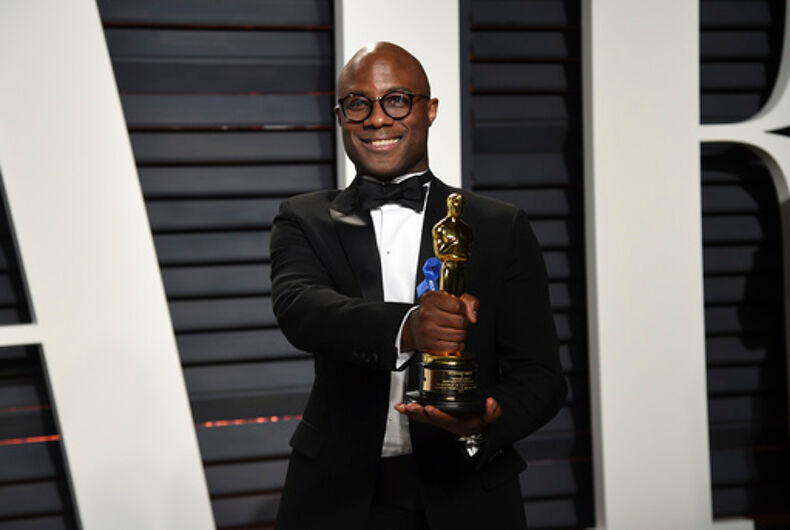 NEW YORK (AP) — Long before Barry Jenkins made his way to the podium through the bewildered throng that packed the Dolby Theatre stage at the Academy Awards, he sat in a Toronto hotel room explaining his movie’s quiet power.

“There’s something in the way black men grow up in this country,” said Jenkins. “There’s a lot of information on these men’s faces when they’re not speaking, partly because we’re robbed of our voices so much by society and the things society projects on us.”

It was, in a way, fitting that “Moonlight” — stealthy and silent — won best picture amid such cacophony Sunday night. Since its fall film festival debut, Jenkin’s tenderly lyrical film has steadily risen not through the loud kind of arm-waving that often catapults movies to the top prize — big box office, scene-chewing performances, historical sweep — but instead by a soulful, unremitting glow that slow-burned all the way to the Oscars.

Now that we more or less have some answers to “What the heck happened?” in the Oscars’ final moments — EnvelopeGate, if you will — we can turn to that other puzzler: How did “Moonlight” just pull off one of the biggest upsets in Academy Awards history?

While not quite as gasp-inducing as the gaff that preceded its win, “Moonlight” will surely rank alongside, if not above, shockers like “Shakespeare in Love” (over “Saving Private Ryan”) and “Crash” (over “Brokeback Mountain”) for sheer, oh-my-god surprise.

The odds were stacked against it. “La La Land,” with a record-tying 14 nominations, was seen as the hands-down favorite, having run up prizes from the Producers Guild, the Directors Guild, the BAFTAs and the Golden Globes. Though this usually hapless critic predicted a “Moonlight” win , virtually every Oscar prognosticator considered “La La Land” — like Hillary Clinton, it turned out— a lock.

But just as Clinton learned, there are dangers to being the presumed front-runner, especially when you’re seen as a representative of nostalgia and tradition in turbulent times.

Widely expected to honor itself again by awarding a showbiz celebration like “La La Land,” Hollywood veered instead to Miami’s Liberty City, and a film that ripples with the humanity of a young man — black, gay, poor — seldom dignified by the movies or other realms of society. Yet “Moonlight” isn’t a traditional social drama but a deeply personal one, soaked through with the kind of empathy many believe is missing from the national discourse. In the wake of the election of Donald Trump — surely a factor on Oscar night — Hollywood chose not a love letter to itself, but, as filmmaker Mark Duplass argued in an open-letter to academy voters , a “love letter to the core human values that connect us all.”

“Moonlight,” arguably the most critically adored film of 2016, is unquestionably deserving. In fact, it might even be too deserving. Films this good don’t often win best picture. Even “La La Land” star Emma Stone took a moment in the chaotic aftermath Sunday to exclaim: “I love ‘Moonlight!”

But “Moonlight” was made for just $1.5 million. It was only Jenkins’ second film, and his first in eight years. Having made $22.2 million at the box office, it’s one of the littlest-seen best-picture winners ever. The littlest seen best-picture winner was Kathryn Bigelow’s “The Hurt Locker” (2009), which had made $12.7 million at the time of the Oscars.

The comparison is a good one, in some ways. Like “Moonlight,” ”The Hurt Locker” triumphed over a colorful event movie that was praised for resuscitating the theatrical experience: “Avatar.” And it was boosted by some compelling history: Bigelow’s film was the first best-picture winner directed by a woman. “Moonlight” is the first directed by an African-American filmmaker. Its win, also the first for an LGBT-themed movie, is sure to inspire a generation of filmmakers.

Only one major studio release (Warner Bros.’ “Argo”) has won best picture in the last decade. “La La Land” was distributed by Lionsgate, often called a “mini-major,” and had much the feel of an old studio musical. Its 14 nominations and $370 million-plus in global box office only enhanced its reputation as the juggernaut front-runner — with the requisite backlash to go with it.

But, increasingly, small wins big at the Oscars. For four years straight, the Film Independent Spirit Awards winners — “12 Years a Slave,” ”Birdman” and “Spotlight” — have lined up with the Oscars. It could well be that academy voters, working in an industry that increasingly makes little beyond branded blockbusters, are most moved by the personal cinema that has managed to escape Hollywood.

“I hope we are moving in that vein,” said Tarell Alvin McCraney, co-writer of “Moonlight,” which was based on his play. “I hope the storytellers up here and their proud journey here can imprint on someone out there watching, that they, too, can stand here too, and also tell their stories as daringly, as intimately as possible.”

“Moonlight” had won at the Writers Guild Awards and the Globes and (unlike “La La Land”) been nominated for best ensemble by the Screen Actors Guild. But it broke all the rules that help predict Oscar winners. There are factors that may have played a role, like the revamped film academy, which added 683 new members in June to help diversify its ranks. And the best-picture category, unlike the other categories, uses a preferential ballot to select the winner, a ranking method adopted in 2009 when the category increased from five movies to as many as 10. It’s a system that rewards films with broad support, not necessarily the most No. 1 votes.

Jenkins didn’t have any answers himself, sounding amazed and impressed that the industry “voted for a film about a marginalized character from a marginalized community told in a very unorthodox way.”

Ellen, Lady Gaga & Pharrell team up for ‘The Love Project’ in uplifting video