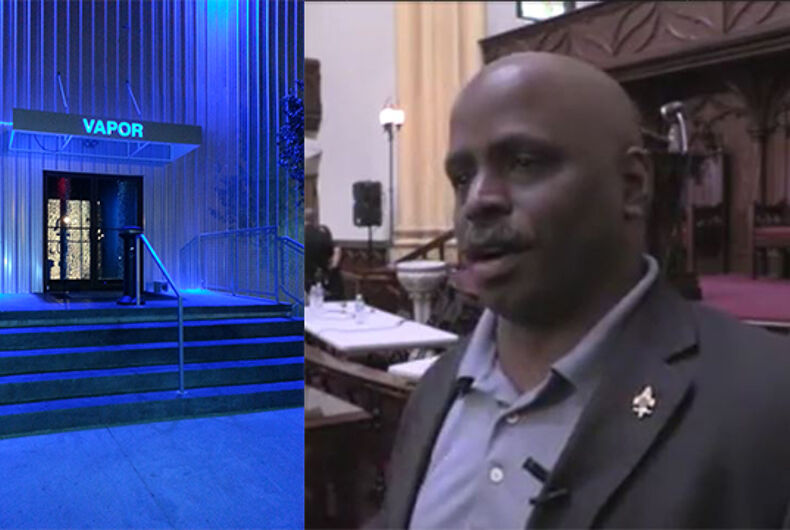 A Democratic city councilman from Louisville, KY wants to shut down a private “spa” that caters to gay clientele because he’s not convinced it’s a real “spa.” At least, not the kind of “spa” he’s familiar with.

Councilman David James tells WHAS-TV he has a sneaking suspicion Vapor Spa isn’t a “private all male health spa” as its website claims, but rather an underground harem for unsafe sex practices between men that poses a genuine threat to public health.

How very San Francisco circa 1984 of him.

The spa is located inside a 450,00-square-foot business development. James claims a CDC study found approximately 20 percent of Louisville’s gay men who have contracted STDs also visited the establishment.

“We have issues of sexually transmitted diseases according to the health department coming through there,” he explains. “But the bigger problem is this is a place that advertises and suggests lewd behavior at its location.”

In an effort to build his case, James says he paid a visit to the spa, and that he will never be able to un-see many of the things he witnessed.

“There were people openly having sex all over the place!” he says. “I was kind of shocked.”

But owner George Stinson says there’s no record of James ever visiting. He explains that all patrons are required to sign an agreement that states they are gay man before entering the spa, which is kind of weird in and of itself, no?

So, in theory, unless James presented a fake name and ID, his story about people “openly having sex all over the place” doesn’t check out.

Stinson adds that he’s owned several gay businesses over the past four decades, and that each and every one has, at some point, been accused of being a sex club.

“It never stops,” he says. “I have operated gay businesses for 40 years and every one has been called a sex club.”

Stinson also challenged the CDC study claiming 20 percent of STD cases among gay men in Louisville can be traced back to Vapor Spa.

“What percent of those men also went to church on Sunday or visited the grocery store?” he asks.

As for James, he’s determined to bring the issue up at the next council meeting.

“I don’t know that we want to generate economic development through a sex club in Louisville,” he says, “if that’s what we want to be known as.”

We figured that much.