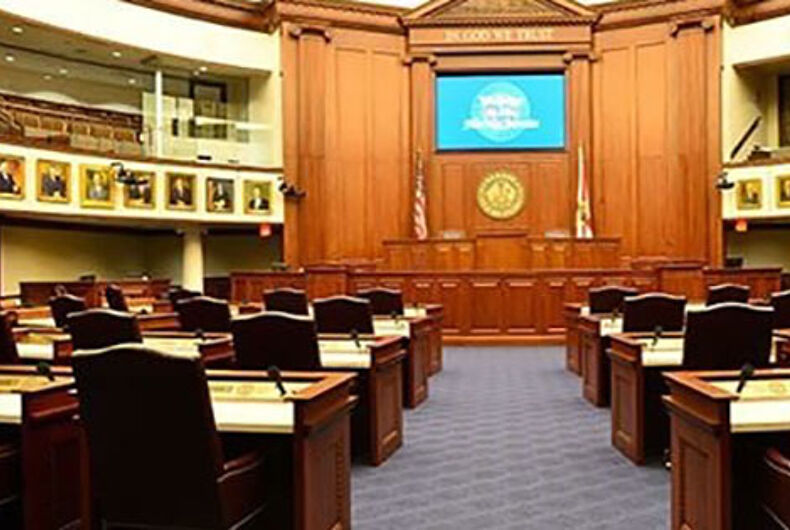 Florida Sen. Travis Hutson is a 32- year-old Republican from Jacksonville, Fla., who says legislation attacking the LGBTQ community is falling by the wayside, and he expects support to grow for anti-discrimination protections.

“It’s certainly a seismic shift,” she told the paper. “What we saw over the last five years, especially, is a growing number of people who understand LGBT equality does not have to be a partisan issue.”

Two years ago, a bill targeting transgender people’s bathroom use was proposed but it did not pass. And thus far, no similar legislation has been filed by the start of session earlier this month, a critical deadline.

“I certainly hope that legislators in Florida are paying attention to what happened in North Carolina,” said Willard. “The LGBT community here in Florida is very out and proud, especially after the Pulse massacre. Folks have learned the story of LGBT communities, our families have become more visible, and it’s really shifted the needle.”

That does not mean there are no threats. A new HB 2-style bill, HB 17 ,would undo business regulations passed by cities and counties, including local ordinances meant to protect the LGBTQ residents and visitors to Pinellas, Hillsborough, Miami-Dade and Broward counties. Some of these ordinances have been the law of the land for decades.

Other pro-LGBTQ proposals, such as the Competitive Workforce Act and a housing protections bill, lack the support of House and Senate leadership and social conservatives who control key legislative panels.

Sen. Dennis Baxley of Ocala, told the Herald he is still “reviewing” the protections and has not yet made up his mind. It’s the Republican’s committee on Governmental Oversight and Accountability that would approve any new anti-discrimination language before it could be voted on by the full Senate.

“I’m very cautious about creating more grounds for a lawsuit,” Baxley said, saying he is thinking about the issue like a businessman trying to manage personnel and hiring.

Baxley’s reputation in the Capitol is that he is passionate in his defense of socially conservative issues. In 2015, he voted against a proposal meant to encourage adoptions because it also struck down a 33-year ban on gay people adopting children that had already been thrown out by the courts.

Senate Judiciary chairman and Republican Greg Steube of Sarasota’s committee includes two of the Republicans who co-sponsored LGBTQ protections. But Steube has not indicated to the paper whether he will allow a vote.