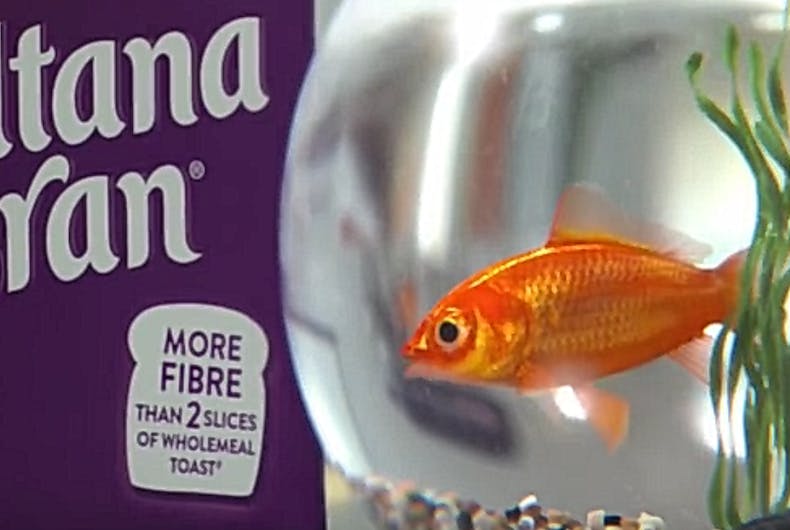 A commercial featuring an animated goldfish with a “queer voice” will be allowed on the air in Australia.

The commercial is for Kellogg’s Sultana Bran cereal, which has so much fiber that even goldfish are impressed.

The Australian Advertising Standards Board received complaints that the fish’s voice was discriminatory against gay men. “By utilizing the camp voice and tones the advert and advertisers have perpetuated the stereotypical characteristics of gay males that have been criticised over the last decade… and contributing to the denigration of the LGBTIQ community and in particular towards gay men,” one of the complaints read.

“It is no longer acceptable to utilise these forms of characteristics to sell products and by doing so the advertising company and Kellogg’s are continuing to contribute toward the social harm and detriment of the gay community.”

Kellogg’s responded in a statement that the fish was not meant to be gay in any way. “The goldfish was not depicted, nor given features or movements, which were homosexual in nature. Further, the advertisement made no reference to homosexual relationships. There was no innuendo or further suggestion of anything other than a distinctive voice. The character depicted was not intended to be homosexual.”

The Advertising Standards Board concluded that, while the fish does have a “camp” voice, it was “not sexualised and its gender was not clear.” The ad is cleared for airing on television.

The complaints are clearly wrong, though. Flamboyant voices don’t lead to “social harm,” homophobia does. Some men – gay and bi and straight – have campy voices and there’s nothing wrong with that.

If even cartoon goldfish have to deepen their voices to sound more butch in public, then hate has already won.

Check out the ad for yourself. The fish is setting off my gaydar, but maybe it’s just Australian.

HB2 ‘compromise’ is just another version of hate in North Carolina