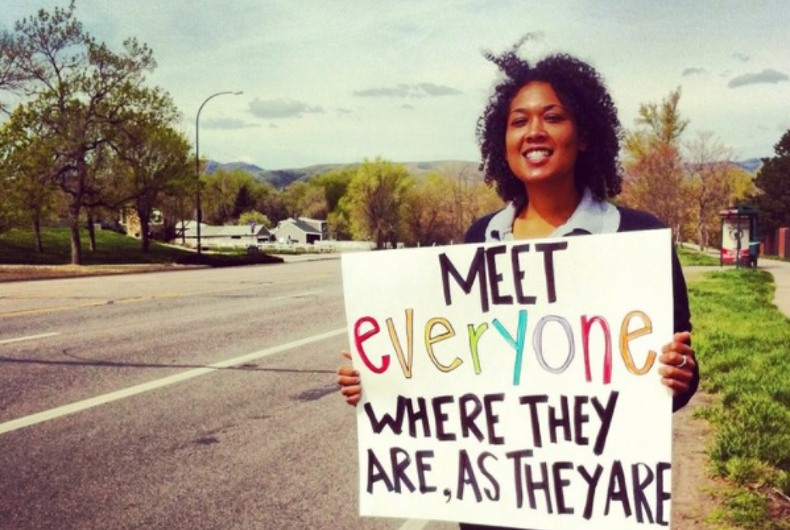 In most Western Christian traditions, God is a “he” and Jesus is white. And all too often, the Bible is used to justify hate and discrimination.

But is the Bible — and Christian spirituality — really just for straight, white conservatives? Not if you ask Crystal Cheatham, creator of Our Bible App.

“I’m black, I’m a lesbian, and I’m tired of feeling like my faith doesn’t matter,” Cheatham said in a release. “Some think it’s an anomaly that a black lesbian can be a Christian, but there are many out there like me, not just gay but those who are pro-choice and Christian, anti-Trump and Christian and interfaith and Christian.”

That’s why Cheatham, a writer and activist who co-hosts the podcast Lord Have Mercy, is designing what she calls a “meditation app for LGBTQ Christians, their friends, family and allies.” The app launches June 2017 and is anticipated to include: a library of devotionals that are pro-women, pro-LGBTQ, and inclusive of other faith; the ability to chat with the Our Bible App community; a variety of Bible translations; and podcasts, videos, and other media.

“I believe in popular education, that’s why I’m accepting daily devotionals from anyone willing to sit down and pen one,” Cheatham said. “This app is for all identities, not just those who fit into the white, heteronormative mold that has fed conservative Christianity for so long. I believe spirituality is a spectrum and I want to create something for those who have been harmed by the church and for those who still fiercely love it.”

To that end, the app will include content geared toward those who aren’t interested in a lot of scripture with genres like “Social Justice As Worship” and “Bible Lite Meditations.” Cheatham writes on her website that she understands the conflict many people of faith on the margins face.

“I’m constantly working to reconcile my confluence of identities with the image of what the world expects a black woman to be like. As it turns out I’m also a lesbian and have great faith in God,” she writes. “It’s not easy work, especially in a society like ours that doesn’t quite embrace difference and diversity, as I’m sure you know too.”