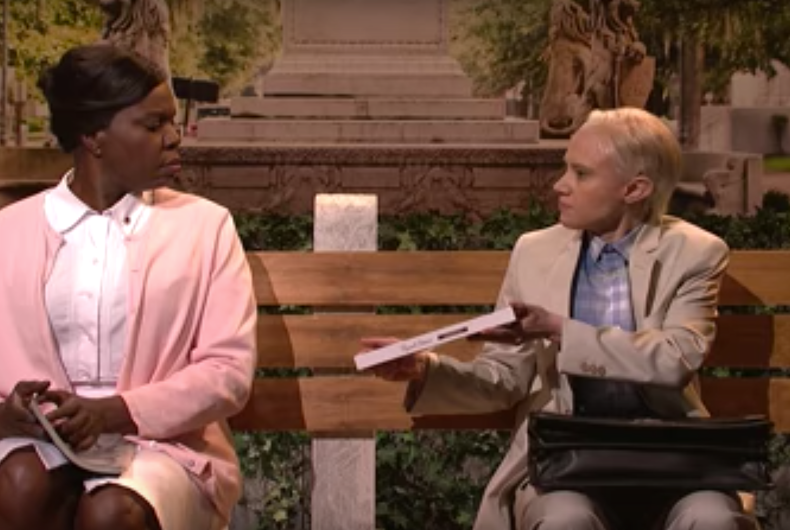 Kate McKinnon reprised her impression of Jeff Sessions in a parody of Forrest Gump (with Sessions as Gump).

“Hello. My name’s Jeff. Jeff Sessions. Would you like a chocolate?” Sessions asks a stranger (played by Leslie Jones) while sitting at a bus stop in SNL‘s cold open. “Well, I’m going to have one.”

Sessions goes on talk about himself.

“I’m the attorney general of the whole United States. Being in the government is so fun. Have you ever been in it? You meet so many nice people. Like this, this is my best good friend Kellyanne. She ain’t got no legs,” Sessions says as he pulls out the now meme-famous photo of Kellyanne Conway sitting on a couch in the Oval Office with her feet tucked under her.

“I always say, ‘Life is like a box of chocolates,'” Sessions continues to the disinterested stranger. “There sure are a lot of brown ones in there!”

As other strangers come and go, Sessions tells them contradicting stories, like how he never met with any Russians — except that one.

“I talked to the Russians — twice,” he tells a stranger after having denied it to his previous bench mate. “You know, I met with a person who turned out to be Russian on account of he was the Russian ambassador. His name was Sergey Kyslyak. Now I remember any name with the words ‘gay kiss’ in it.”

Even shirtless Putin makes an appearance. Check out the full sketch below.

Black lesbian launches ‘Our Bible,’ a devotional app for people on the margins