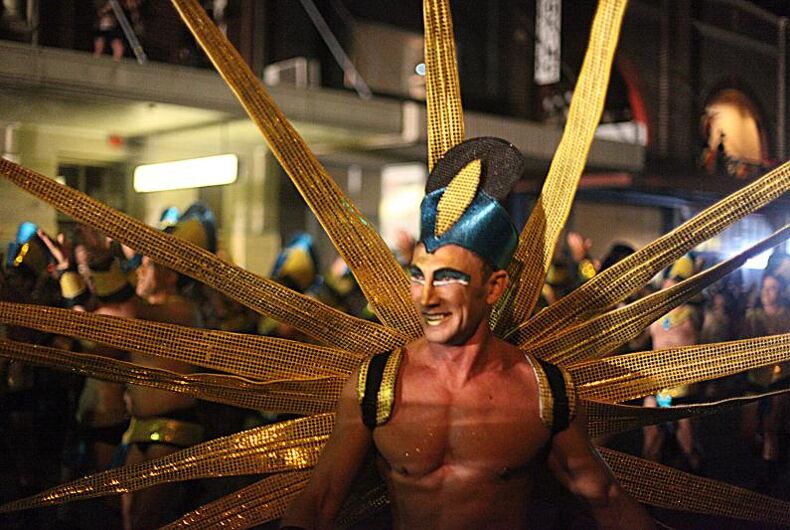 A man walks in the Sydney Gay and Lesbian Mardi Gras parade in 2010.Photo: Andy Tyler/Flickr

But the Sydney gay community became split over whether he would be welcome at the event on Saturday due to his conservative government’s policy on gay marriage.

Turnbull said Thursday that while he strongly supported the Mardi Gras, he would be out of Sydney on Saturday.

“I go most years. I’m not going this year. I will be interstate on other matters,” Turnbull told reporters, without elaborating.

Turnbull has long been a vocal supporter of gay marriage. Before he became prime minister in late 2015, he argued that lawmakers should be allowed to decide the issue in Parliament without being expected to vote along party lines.

But the more conservative lawmakers in the ruling party want to ask the Australian public their opinions in a national vote. Marriage equality opponents had supported the so-called plebiscite, while most gay marriage advocates oppose it, warning it would spark a divisive public debate.

Turnbull initially opposed the plebiscite, but agreed to go ahead with the plan for it in return for right-wing support when he was challenging then Prime Minister Tony Abbott for leadership of the ruling party.

But the Senate in November rejected legislation that would have allowed the national vote to take place last month. Gay marriage is now off the government’s agenda.

Also in November, a Mardi Gras annual general meeting voted to tell Turnbull he was no longer on the official guest list for the 2017 festivities because of his support for the plebiscite. But the Mardi Gras board of directors later rejected that, pointing to the festival’s constitutional objective to build relations between gays and the wider community.

Turnbull is already under increased pressure, with an opinion poll published this week showing his popularity has reached a new low point and that his government was trailing further behind the center-left opposition.