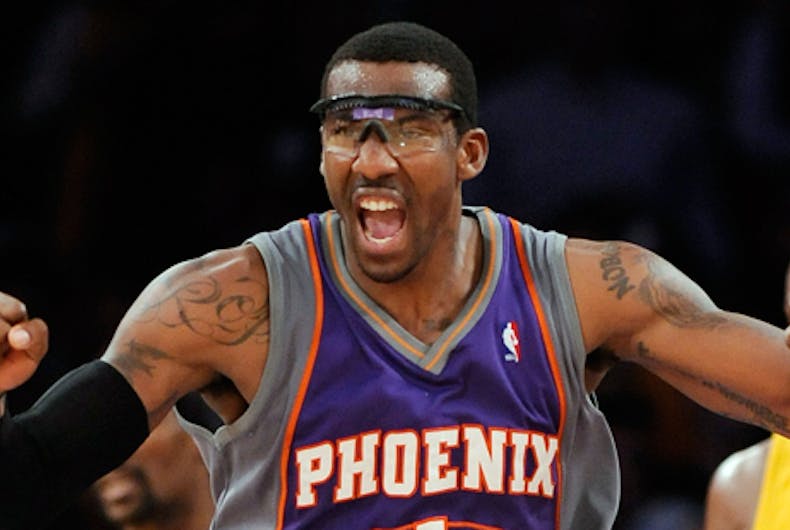 Former NBA star Amar’e Stoudemire may not be in the league anymore, but he is still playing basketball professionally, in Israel, and is apparently still homophobic.

When asked by the press how he would feel about having a gay teammate, Stoudemire showed himself to be as fragile as his chronically injured knees.

“I’m going to shower across the street, make sure my change of clothes are around the corner,” he said. “And I’m going to drive [and] take a different route to the gym.”

Stoudemire was given a chance to clarifying that he is not actually still, at the approach of middle age, as immature as he was when, in 2012, he directed a homophobic slur at a Twitter user during the NBA’s Gay Pride weekend. He was fined $50,000 and issued an apology.

“Huh? I mean, there’s always a truth within a joke,” Stoudemire responded.

Stoudemire currently plays for Hapoel Jerusalem, a team he co-owns. Other members of the team were asked the same question, and none of them had a problem with the idea of a gay teammate, albeit one did add the caveat, “As long as he doesn’t mess with me.”

On Sunday, Stoudemire was honored by the Consulate General of Israel in New York, receiving its annual Martin Luther King Jr. Award, reports the Washington Post.

The award is given to “individuals and organizations promoting ethnic and cultural understanding,” and he was honored for his work with at-risk youth.

No word yet on whether all those kids are straight.

Update: Stoudemire has apologized for his comments in a statement:

“I want to apologize for my offensive comments against the LGBT community. These remarks were taken from a larger interview where a reporter was asking me hypothetical questions, and all my answers had a comedic undertone. The answers I gave were meant to be taken as jokes, and I am deeply sorry for offending anyone.”