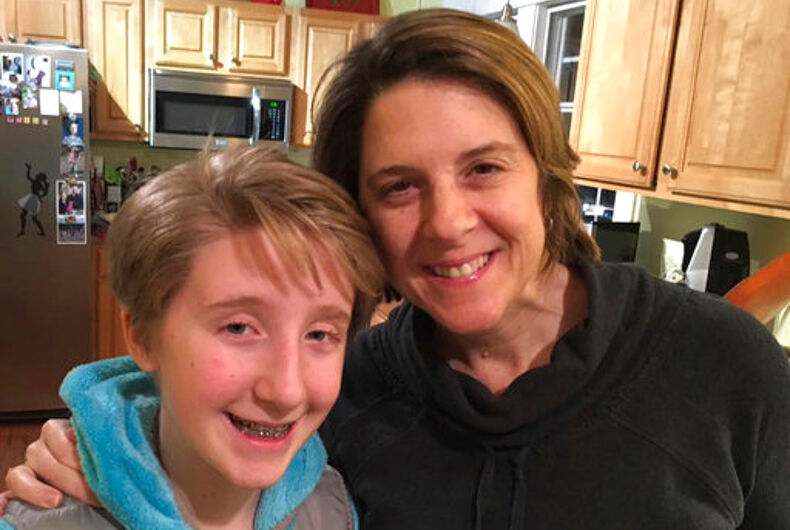 In this photo provided by Clare Schexnyder, small business owner Clare Schexnyder, 49, poses with her daughter, Sofi, in their kitchen in Decatur, Ga., on Jan. 27, 2017. A breast cancer survivor, Schexnyder says she wouldn’t be alive if not for the Obamacare that paid for her mammograms, and finds it “unforgiveable” that Republicans are sabotaging access to affordable health care. (Clare Schexnydervia AP)Photo: AP

ATLANTA (AP) — Americans who have benefited from the Affordable Care Act are feeling some relief at the failure of Republican efforts to repeal it, but they face new anxieties with President Donald Trump tweeting that “ObamaCare will explode.”

ObamaCare will explode and we will all get together and piece together a great healthcare plan for THE PEOPLE. Do not worry!

Premiums have risen and major insurers have backed out of the state markets where people can buy insurance online under Obama’s signature health care law. But people who say it saved their lives or helped them start a business want lawmakers to fix these problems, not encourage them.

“It does need its fixes, I totally see that,” said Inge Hafkemeyer, 57, who credits the law’s subsidies for containing her costs as her home-based event-planning business took off in Mission, Kansas, a Kansas City suburb. “But if your roof leaks, you don’t burn down the house to fix it.”

Clare Schexnyder, 49, is convinced she’s alive today because of it. As a small business owner in Decatur, Georgia, she couldn’t afford health insurance until the rollout in 2013. She began getting mammograms, and her breast cancer was spotted in time. Her double mastectomy and reconstruction surgery was priced at $250,000, but she paid no more than her $6,200 annual deductible.

Then, her daughter spent a week in the hospital after her appendix burst, costing them another $6,200. They took out a second mortgage to pay the bills.

“An appendectomy shouldn’t have to make me refinance my house,” she said. “It’s still not a perfect system by any means, but I’m glad we have it.”

Schexnyder’s insurer pulled out of the Affordable Care Act last year, leaving fewer alternatives in Georgia, one of the states that refused to set up insurance exchanges or participate in Medicaid expansion.

But she objects to tweets like this one Trump sent on Saturday: “ObamaCare will explode and we will all get together and piece together a great healthcare plan for THE PEOPLE. Do not worry.”

“They’re setting it up to fail, which is irresponsible and unforgiveable,” Schexnyder said.

Shannon Henson, a 49-year-old unemployed conference planner in the Kansas City suburb of Independence, Missouri, said the Affordable Care Act has been a good starting point.

“It wasn’t going to be perfect from the get-go,” she said.

“We’re going to be living with Obamacare for the foreseeable future,” Ryan, R-Wis., told reporters.

The law has covered more than 20 million people who were previously uninsured through private insurance sold on the law’s marketplaces and by expanding Medicaid, the health program designed to help poor Americans. It required insurers to cover “essential” services, including mammograms, and barred them from refusing policies to the very sick or others with pre-existing health conditions.

But premiums jumped by double digits this year as the cost of medical care and prescription drugs continues to soar, and the marketplaces created by the law are short on the healthy consumers who make insurance companies profitable. In about one-third of U.S. counties, consumers in the individual markets don’t have a choice of plans.

Mina Viladas, 53, of Fairfield, Connecticut, said she was covered under the Affordable Care Act when she needed emergency surgery. But the self-employed fitness trainer said the insurance plans are getting more expensive.

“The Democrats need to work on improving it, with the Republicans, if possible,” she said. “But I’m happy it’s still where it is because it’s saved me.”