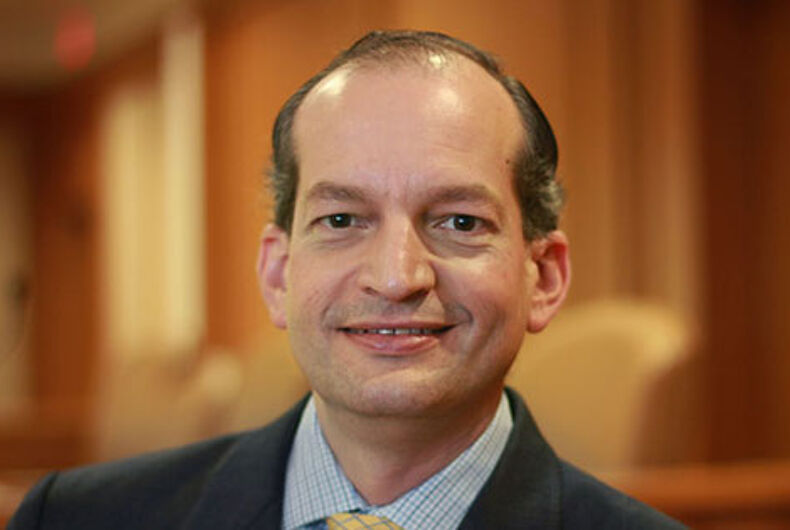 Trump began a Thursday news conference hailing Acosta’s credentials: “Former clerk for Justice Samuel Alito, he has had a tremendous career. He is a member and has been a member of the National Labor Relations Board, and has been through Senate confirmation three times, did very, very well.”

What is not clear is where this new nominee stands on the minimum wage, right to work labor laws and LGBTQ rights.

Acosta was named to head Florida International University’s College of Law in 2015. FIU is Miami’s first and only public research university, founded in 1969, with a proud tradition of supporting LGBTQ students and staff.

Those three Senate confirmations Trump alluded to put Acosta on the National Labor Relations Board, from 2002 through 2003, then he was the first Hispanic to be appointed assistant attorney general for the U.S. Department of Justice’s Civil Rights division. Acosta was appointed to both the NLRB and Justice Department by President George W. Bush.

In 2004, Acosta notified a federal judge that the Justice Department was not opposed with a Republican plan to place “challengers” at some polling places during the election. Democrats had argued that it was discriminatory because the challengers were being placed mainly in neighborhoods where the majority of the population were people of color.

A year later Acosta took the side of the Boy Scouts of America in a case brought by the American Civil Liberties Union, challenging the organization in its fight to lease a city-owned facility. The ACLU claimed the BSA was a religious organization, and that the group discriminated by requiring members to profess a belief in God and doesn’t allow homosexuals to join. The suit was brought on behalf of a lesbian couple and an agnostic couple prior to the BSA’s acceptance of gay scouts, troop leaders and transgender boys.

Acosta argued in 2005 that the Boy Scouts are “a social recreational organization dedicated to promoting good character” in a way that “respects and supports” the religious values of the boys who become Scouts, and that it was no different than Congress holding a prayer at the start of its legislative session.

Acosta resigned from Justice in 2005, and was chosen by President Obama to be the U.S. Attorney for Southern District of Florida, the longest serving U.S. Attorney in the District since the 1970s.

In 2011, Acosta testified before Congress about the importance of protecting the civil rights of Muslim Americans. He told the committee “we are a nation build [sic] on principles of freedom, and high on the list of freedoms is freedom of religious expression. Indeed, as is well known to this Committee, this freedom pre-dates our Constitution.”

Acosta spoke about a variety of cases he has dealt with involving the civil rights of Muslims, including one in which he instructed the Justice Department to intervene when a young girl was asked to take off her hijab in school. And he remained a strong admirer of President Bush.

“Our nation is strong because we respond to attack with resolve,” he said. “History has shown the need, however, for leadership that tempers resolve with wisdom. President George W. Bush understood this, when on September 17, 2001, he visited the Islamic Center of Washington D.C. to remind a resolute nation that ‘[t]hose who feel like they can intimidate our fellow citizens to take out their anger… should be ashamed of that kind of behavior.’ This was not the message many Americans wanted to hear at that time, but the President chose to lead, rather than to be led.”

Among his high profile cases, noted by Heavy.com: the trial of Ali Shaygan, a doctor who was accused of illegally prescribing painkillers. Three prosecutors and a Drug Enforcement Administration official were caught illegally recording conversations with Shaygan’s attorney. He led the prosecution of UBS, a Switzerland bank accused of helping Americans evade taxes. The bank paid a $780 million settlement and agreed to hand over the names of some of their clients, according to the Washington Post.

Acosta’s other prosecutions include the terrorism case against the Liberty City Seven cult; the conviction of Chuckie Taylor, son of the former president of Liberia, on human rights violations, including torture; and cocaine traffickers Miguel and Gilberto Rodríguez Orejuela.

Acosta serves on the Commission for Hispanic Rights and Responsibilities. He was also named one of the 50 most influential Hispanics by Hispanic Business Magazine.

The reason Acosta is now the nominee is because fast-food executive Andrew F. Puzder withdrew his nomination to be labor secretary on Wednesday, after even Republican senators started to lose faith in him. Puzder’s employment of an undocumented immigrant as his housekeeper and records from his 1988 divorce, shared on Tuesday by opponents, gave new life to accusations of spousal abuse.

Although Puzder’s ex-wife recanted those accusations, an old episode of “The Oprah Winfrey Show,” in which she laid out the charges while in disguise, made the rounds among senators on both sides.