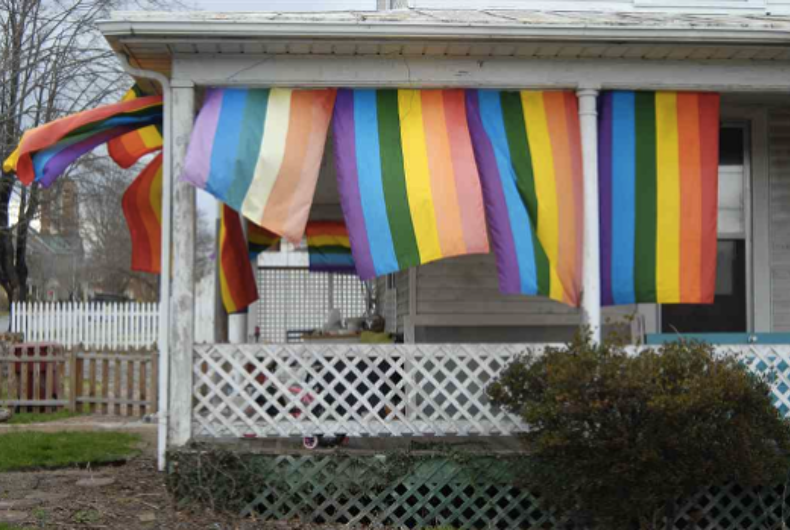 A woman found herself the target of a suspected hate crime in the sleepy town of Johnson City, Tennessee, the Johnson City Press reports.

Gaelyn Porter says she awoke early Monday morning when she heard someone shouting outside her house.

“Throw it out!” the person yelled.

When she looked out the window, a white truck sped off down the street. Thinking nothing of it, she went back to bed.

When she stepped outside later that morning, she discovered a rotting cow carcass had been dumped in front of her fence and nails scattered all around her car.

“I don’t know what motivation they would have for doing something like this,” she tells the Johnson City Press. “No one here has any enemies. Why would they be so hateful?”

However, Porter suspects it may have something to do with the rainbow flags she had hanging around her front porch. She has a total of ten colorful flags flying on her property.

Porter filed a police report and an animal control officer came to dispose of the carcass.

According to Porter, the officer told her he had never seen anything like it in his nearly 15 years of working for animal control.

Porter’s neighbors quickly rallied around her in support. A neighborhood group has begun selling rainbow flags for $5 a pop and is encouraging people to hang them in their yards, with proceeds going to the Tennessee Human Rights Campaign.

As for Porter, she says she’s not going to let the bizarre incident intimate her.

“I refuse to let something like this make me live in fear,” she tells the Johnson City Press. “I’m not going to take my flags down. In fact, I’m going to put up more, and I hope everyone else does, too.”