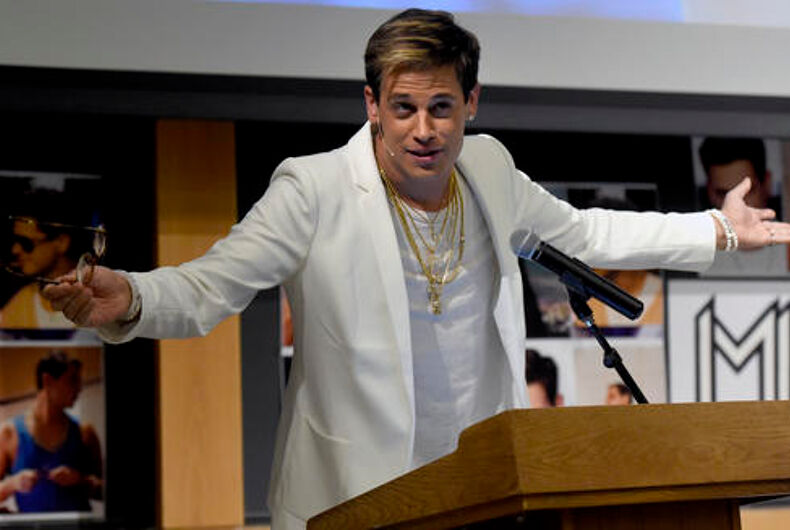 NEW YORK (AP) — Sales are soaring for the upcoming book by incendiary right-wing commentator Milo Yiannopoulos but details of his promotional tour — assuming there is one — are a mystery for now.

A spokeswoman for Threshold Editions, the conservative imprint at Simon & Schuster, declined comment Thursday when asked where Yiannopoulos was expected to appear on behalf of Dangerous. Publishers would usually be anxious to share details about a book just a few weeks from publication, March 14, and in high demand from the public. Dangerous was No. 1 on Amazon.com as of Thursday evening.

But the controversy that has driven pre-orders for Dangerous has also made promotion unusually complicated. The 32-year-old Breitbart editor, born in Greece and raised in England, is a walking challenge to free speech principles. A vocal supporter of President Donald Trump, Yiannopoulos has made vicious comments about Muslims, women and others, and on his web site offers such products as “Feminism is Cancer” T-shirts and “Fat Shaming Works” hoodies. His harassment campaign last summer against “Ghostbusters” star Leslie Jones led to his banishment from Twitter.

Yiannopoulos’ talks have sparked protests, shouting matches and occasional violence at stops around the country. On Wednesday, the University of California, Berkeley cancelled a scheduled talk by Milo after violent protests broke out. A man was shot and wounded at protests outside his Jan. 21 talk at the University of Washington.

Rowdy protests at UC Davis on Jan. 13 prompted campus Republicans to cancel his appearance at the last minute. His final stop was supposed to be UCLA on Thursday but the invitation was rescinded, making Berkeley his grand finale.

Yiannopoulos’ book deal was greeted with immediate anger when announced in late December. Hundreds of authors have objected and one writer, Roxane Gay, withdrew a book she had planned for Simon & Schuster. Many independent sellers have expressed uneasiness, saying they will make the book available if asked for, but will not promote it. One store, The Booksmith in San Francisco, has announced it will neither stock the book nor order a copy upon customer request. Booksmith also said it was cutting orders for Simon & Schuster books by 50 percent.

“While we respect Simon’s decision to publish any book, we reserve the right to allocate our discretionary inventory dollars with publishers who act with ethical & moral standards consistent with our own,” reads a posting from the store.

Yiannopoulos’ web site lists no future public appearances and information about a possible book tour is hard to find, as it has not been updated lately. A spokeswoman for the country’s largest physical bookstore chain, Barnes & Noble, said that Yiannopoulos had no events planned at any of its stores. Simon & Schuster is part of CBS Corporation, but the network said Thursday that it had no interviews scheduled with the author.