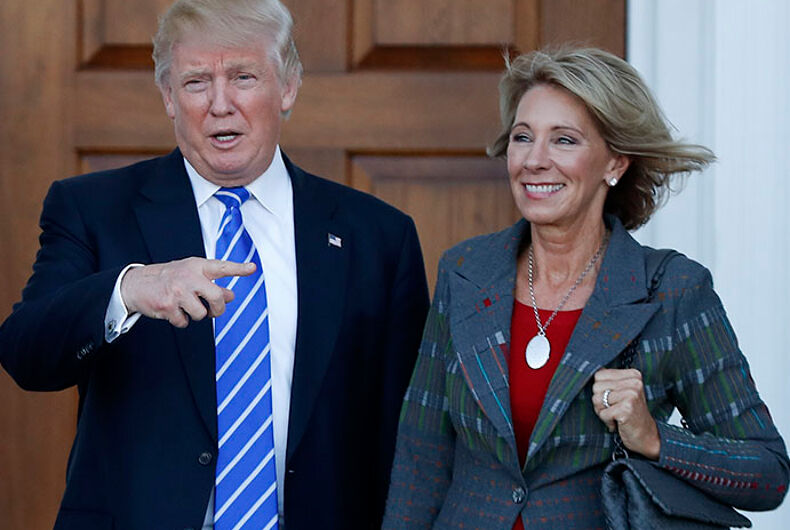 One thing I often hear liberals say about Republicans is that, no matter what, they stand up for what they believe in, unlike those feckless Democrats who have no spine.

Nothing could be further from the truth. Republicans rarely show the courage of their convictions. Instead, they look for the nearest authoritarian leader and fall in line, because that’s how they believe the world should work.

Take Education Secretary Betsy DeVos this week. Several anonymous Republican sources attempted to put on one of the oldest plays in DC theater, an act known as “One Principled Official Secretly Stood Up for the Right Thing.” DeVos is in particular need of the good press this play can generate after she was almost refused confirmation by the Senate because of her overwhelming lack of qualifications for the job.

This number is performed by anonymous sources. In this case, these sources were identified as Republican and they went to the New York Times and the Washington Post to say that DeVos opposed Donald Trump’s rollback of transgender rights, but that she ultimately relented under pressure from Trump and Attorney General Jeff Sessions.

This story, in and of itself, doesn’t make DeVos seem like a great person. She could have publicly defied Trump and forced him to either drop the rollback of transgender rights or fire her. She also could have resigned in protest. It’s not like the billionaire heiress needs this job to put food on the table.

Instead, she put a job she doesn’t need and loyalty to a transphobic reality TV star ahead of the safety and equality of transgender students all over America.

A real profile in courage there, and that’s the best reading of this story.

Then, as usual, the Trump Administration’s lack of message discipline meant that it contradicted the series of events that it was trying to make the usually gullible media believe. Press secretary Sean Spicer, when asked, said that DeVos was “100%” in agreement with the move.

This is similar to events from last week when Supreme Court-nominee Neil Gorsuch was quietly saying that he disagreed with Trump’s criticisms of the judiciary in an attempt to provide cover for conservative Democrats to vote to confirm him. As Digby wrote, the White House couldn’t stand the idea that anyone would believe that Gorsuch would be disloyal and attempted to squash the rumors, rumors Republicans were spreading to get a conservative judge confirmed.

Last, it seemed like DeVos herself wasn’t in on the joke, probably due to her lack of experience as a public official. She appeared at the CPAC and defended the rollback on its merits. How are we supposed to believe that she opposed the move when she’s defending it on camera?

So let the rumor just die. DeVos has donated millions to Focus on the Family, a group that isn’t ambivalent on LGBTQ issues. She wanted this just as much as Sessions or Trump did, and she should get no credit for possibly, maybe, secretly opposing it while signing off on it in an official capacity and publicly defending it.