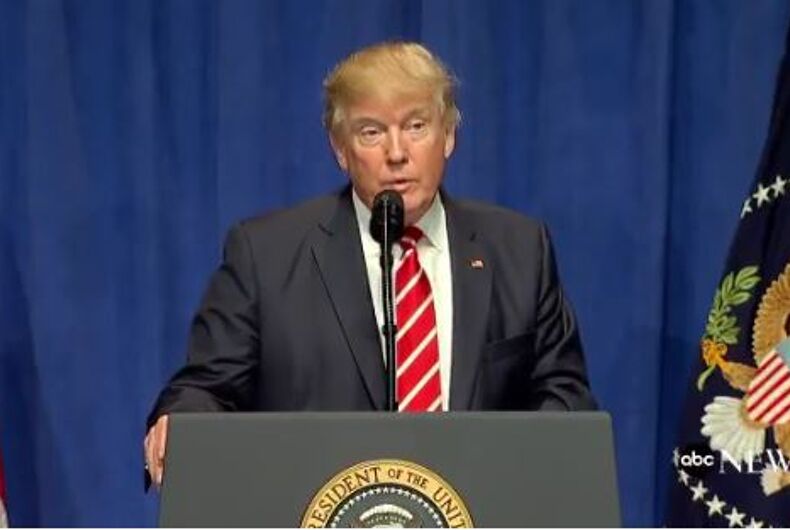 President Trump has continued his attack on the media by claiming terrorist attacks in the United States and Europe are going under reported.

Trump made the bogus claim while speaking on Monday at MacDill Air Force Base in Tampa, Florida.

“Radical Islamic terrorists are determined to strike our homeland, as they did on 9/11, as they did from Boston to Orlando to San Bernardino, and all across Europe,” Trump said. “You’ve seen what happened in Paris and Nice. All over Europe it’s happening.”

“It’s gotten to a point where it’s not even being reported,” he continued. “And in many cases the very, very dishonest press doesn’t want to report it. They have their reasons, and you understand that.”

Pres. Trump claims "dishonest press doesn't want to report" on terror attacks: "They have their reasons, and you understand that." pic.twitter.com/uqBHFTiSBO

Without providing further evidence or explanation for the accusation, he moved on to declaring that “America and its allies” will defeat the “forces of death and destruction.”

Politifact has rated Trump’s claim “pants on fire” for its impressive level of falseness.

Press Secretary Sean Spicer told reporters on Air Force One that the president feels the attacks have been “underreported.”

A few hours after Trump’s speech, the White House released a list of 78 terrorist attacks, saying “most did not receive adequate attention.”

“Below is a list of 78 major terrorist attacks targeting the West that were executed or inspired by ISIS since September 2014, soon after the terror group declared its caliphate. Most of these attacks did not receive adequate attention from Western media sources,” said a White House official when distributing the list, reports CNN.

It includes the mass shootings at the Orlando LGBTQ nightclub, Pulse, and in San Bernardino, both of which received intense coverage.

White House spokeswoman Lindsay Walters said that “the real point here is that these terrorists attacks are so pervasive at this point that they do not spark the wall-to-wall coverage they once did.”

“If you look back just a few years ago, any one of these attacks would have been ubiquitous in every news outlet, and now they’re happening so often — at a rate of more than once every two weeks, according to the list we sent around — that networks are not devoting to each of them the same level of coverage they once did,” she added.