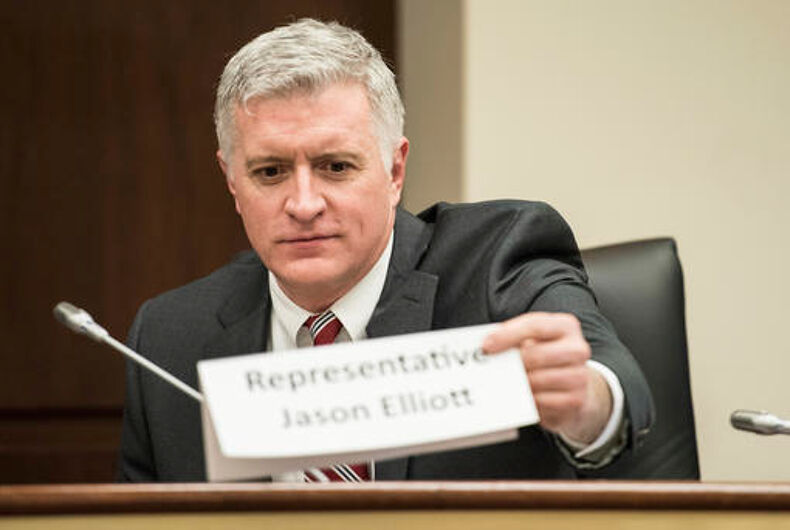 GREENVILLE, S.C. (AP) — South Carolina’s first openly gay legislator hails from the unlikeliest of places: an ultra-conservative part of the state that is home to the Christian fundamentalist school Bob Jones University.

Republican Rep. Jason Elliott, a 46-year-old divorce attorney, said his sexual orientation was not an issue in his campaign and is irrelevant to his job at the Statehouse, as his focus will be on improving education, increasing jobs and repairing the state’s crumbling roads and bridges. He expects his votes to align with his GOP colleagues.

“Every South Carolinian has equal rights, not special rights, and I believe each part of the constitution is equally important,” he said. “In South Carolina, that means respecting other people’s viewpoints and protecting religious freedom.”

Deeply Republican South Carolina is now the 43rd state to have an openly gay legislator. Elliott does not view his election as particularly significant.

“There are people who have a 100 percent opposite viewpoint from me on the orientation issue, and I respect that, and I understand that, and I’m not threatened by that,” the former prosecutor said. “I think what it says, though, is that we are accepting the fact that people are different from us and that we are a state that is moving toward being open to folks who aren’t exactly like us.”

Jeffery Croucher, 59, said when he moved to Greenville from Florida 16 years ago, he was shocked by the anti-gay signs in people’s yards. Now he sees rainbow flags, a symbol of gay pride.

“This area was narrow-minded. They just wouldn’t entertain any other perspective,” said Croucher, adding that while change occurred slowly, it was most dramatic over the last five years.

Elliott’s sexual orientation “shouldn’t have any bearing” on his abilities, Croucher said recently while at a restaurant across from Bob Jones University, which banned interracial dating until 2000 and expects students and employees to agree that sex is limited to married, heterosexual couples.

Voters attribute Greenville’s changing views at least partly to people moving into the area over the last two decades to work for BMW, Michelin or their suppliers. According to the Greenville Area Development Corp., the county is now home to 150 international firms from 25 countries.

Martha McLeod, 88, said she’s often the only Greenville native at community functions. McLeod said she voted for Elliott because she decided it was time for a change. Her husband, George, said he did not, specifically because Elliott is gay.

Elliott, a Greenville native and Clemson University graduate, said he did not fully understand or “accept the reality” of his sexual orientation until about 15 years ago. Elliott, former state director for then-U.S. Rep. Jim DeMint, is a divorced father of a high school senior.

Elliott’s victory over an incumbent was by itself significant, especially since Nanney scored a big win for social conservatives three weeks before the primary. After several years of debate, her bill to ban abortion at 20 weeks became law.

The challenger’s winning message against the former chair of the Greenville County Republican Party was largely old-fashioned constituent service. He hammered her for missing more than 30 percent of votes in the House over the last two years — absences she said were mostly due to illness. He also knocked on more than 2,500 doors, pledging to be accessible to voters.

Elliott said he also benefited from voters’ overall mood for change. He won with 58 percent of the vote.

Nanney said Elliott’s sexual orientation was never an issue because he didn’t tell voters he was gay.

No Democrat bothered to run, but Republican Brett Brocato launched a write-in campaign last fall, criticizing Elliott as “uniquely unqualified to defend the family.” He presented himself as an alternative for general election voters who may not have realized Elliott was gay.

“If it was a secret, if it was one of the worst-kept secrets I’ve ever known,” he said. But he acknowledges he did not make it part of his campaign.

“You’re not going to go to somebody’s door and say, ‘I’m a candidate for this and this is my sexual orientation.’ That would be an odd way to start a conversation,” he said. “When someone says, ‘What’s your agenda?’ My agenda is the South Carolina agenda.”

Lanneau Grant, 74, said she knew Elliott was gay when she voted for him last June.

“Who cares? I just liked his views. I don’t care what his sexual orientation is,” she said while picking up her grandchildren at a Baptist church in the district. “Greenville is changing. We’re getting more tolerant.”

The other states that have yet to elect an openly gay legislator are Alaska, Indiana, Kansas, Louisiana, Mississippi, Nebraska and Tennessee, according to the Gay & Lesbian Victory Fund & Institute.