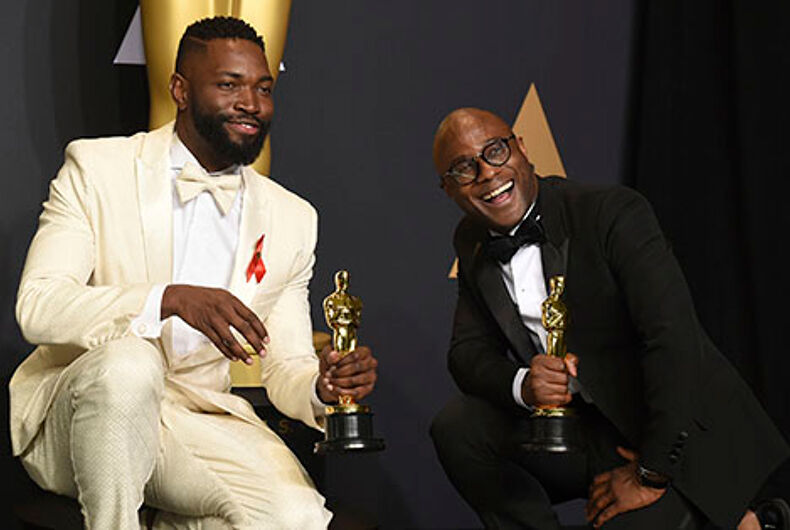 Barry Jenkins’ Moonlight — not, as it turned out, La La Land — won best picture at the Academy Awards in a historic Oscar upset and an unprecedented fiasco that saw one winner swapped for another while the La La Land producers were in mid-speech.

Presenters Warren Beatty and Faye Dunaway apparently took the wrong envelope — the one for best actress winner Emma Stone — onto the stage. When they realized the mistake, representatives for ballot tabulators Price Waterhouse Coopers raced onstage to stop the acceptance speech.

But backstage, Stone said she was holding that envelope at the time. “I think everyone’s in a state of confusion still,” said Stone. Later the actress, who pledged her deep love of Moonlight, added, “Is that the craziest Oscar moment of all time? Cool!”

It was, nevertheless, a shocking upset considering that La La Land came in with 14 nominations, a record that tied it with Titanic and All About Eve. Barry Jenkins’ tender, bathed-in-blue coming-of-age and coming out drama, made for just $1.5 million, is an unusually small Oscar winner. Having made just over $22 million as of Sunday at the box office, it’s one of the lowest grossing best-picture winners ever.

“Even in my dreams this cannot be true,” said an astonished Jenkins, once he reached the stage.

Host Jimmy Kimmel had come forward to inform the cast that Moonlight had indeed won, showing the inside of the envelope as proof. “I knew I would screw this up,” said Kimmel, a first-time host. “I promise to never come back.”

Producer Jordan Horwitz then graciously passed his statue to the Moonlight producers.

Up until the chaotic end, the telecast had seesawed between jabs at Donald Trump and passionate arguments for inclusivity, with awards going to La La Land, Moonlight and Manchester by the Sea.

Damien Chazelle’s celebrated musical La La Land, up for a record-tying 14 nominations, took a while to start cleaning up. But as the night went on, its haul began piling up, winning for cinematography, production, score, song “City of Stars” and best actress for Emma Stone. Chazelle, the 32-year-old filmmaker, also became the youngest to win best director.

“This was a movie about love and I was luckily enough to fall in love while making it,” said Chazelle, speaking about his girlfriend and Oscars date, Olivia Hamilton.

Barry Jenkins, the writer-director of Moonlight and Tarell Alvin McCraney, whose play it was based on, won for adapted screenplay. “All you people out there who feel like there isn’t a mirror out there for you, the academy has your back, the ACLU has your back and for the next four years we will not leave you alone, we will not forget you,” said Jenkins. He added gender nonconforming to the list.

Gay teacher comes out to school, gets ‘phenomenal’ response