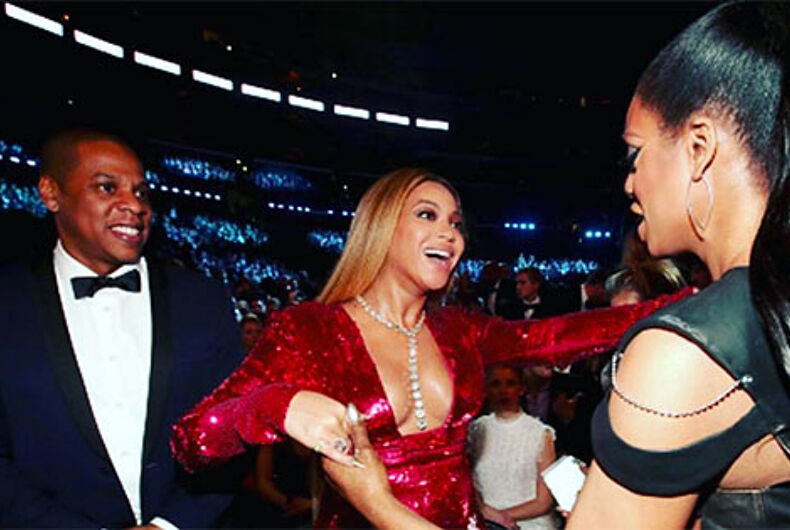 Barely 24 hours after appearing at the Grammy Awards in Los Angeles, Cox arrived on the red eye to grace his Broadway TV stage, ostensibly to promote the new CBS legal drama, “Doubt.” Cox was disarming right from the get go and had the Late Show studio audience cheering and laughing.

“I’m part of the CBS family now,” the actress told Colbert. “That means we’re in the same family. Did you ever imagine that a girl like me would be in your family?” Ever the quick wit, Colbert joked in response that one day he’d show her his dream journal.

Colbert showed his audience Cox’s Instagram post from meeting Beyoncé at the Grammys, and Cox revealed her biggest fear was that she might not meet her idol, but that she’d break down in tears the moment she did.

This finally happened. I was so beside myself with joy, wonderment and awe of the majestic that is the queen I forgot to hold in my stomach and give you face. But I met #QueenBey y'all. #Grammys My new show @doubtcbs premieres Wednesday at 10pm only on #CBS

“I’ve often imagined this day. I dreamed of the day,” Cox said. “When I was getting ready yesterday, I thought, ‘Oh my God if I meet Beyoncé, I’m going to cry, and I started to cry just thinking about it. But in her presence a calm comes over you. A calm came over me, I was strangely calm.”

More receipts that this happened. Lord have mercy. #beyoncé @beyonce #QueenBey and me . She touched me. Lord! Thank you Beyonce for being so gracious and standing to greet me. Finally meeting you means the world to me. I continue to bow to the queen. #Grammys #grammys2017

Cox gave a shoutout to her friend and fellow actress Trace Lysette of “Transparent,” “Blunt Talk” and
“Drunk History” fame, who accompanied her to the awards show Sunday night. Then she regaled Colbert and viewers with the fact that when the “beautifully pregnant” Beyoncé spotted Cox, “She sees me and her face lights up,” Cox said.

Colbert asked her about her request of the Grammy audience to “Google Gavin Grimm,” right before introducing Lady Gaga, who performed with Metallica. “Who is Gavin Grimm?” he asked.

“I felt people weren’t talking about this case,” Cox said, adding:  “If we lose this our rights could be set back.”

For his part, Grimm — the 17-year-old transgender boy whose fight to use the boys’ rest room at school will be heard by the U.S. Supreme Court next month — was ecstatic at the mention, reported the Washington Post. Grimm told the paper he learned of the shoutout when he heard his mother, Diedre, shrieking while watching the Grammys.

“I was just so thrilled because I love her. She’s just a beautiful person inside and out,” Grimm told the Post. “I was really touched and thrilled and honored that that was the first thing out of her mouth.”

Talking with Colbert, Cox quoted attorney Chase Strangio of the ACLU’s LGBT and AIDS Project, in saying “these anti-bathroom bills are not about bathrooms, they’re about stopping transgender people from existing. If we can’t use public bathrooms, we can’t go to school, we can’t go to work, we can’t exist in a public space.

“I exist and I have a right to exist in a public space,” declared Cox to loud cheers from the audience.

Colbert asked if her attorney character on “Doubt,” Cameron Wirth, was a good enough defense lawyer to get her “Orange Is The New Black” character, Sophia, spring from Litchfield Penitentiary.

“I think Cameron could get Sophia off, um, acquitted,” Cox replied with a smile at her apparently unintentional double entendre.

“Doubt” premieres Wednesday on CBS. Click here for a preview of the premiere episode.  Click below for a clip from “The Late Show with Stephen Colbert.”