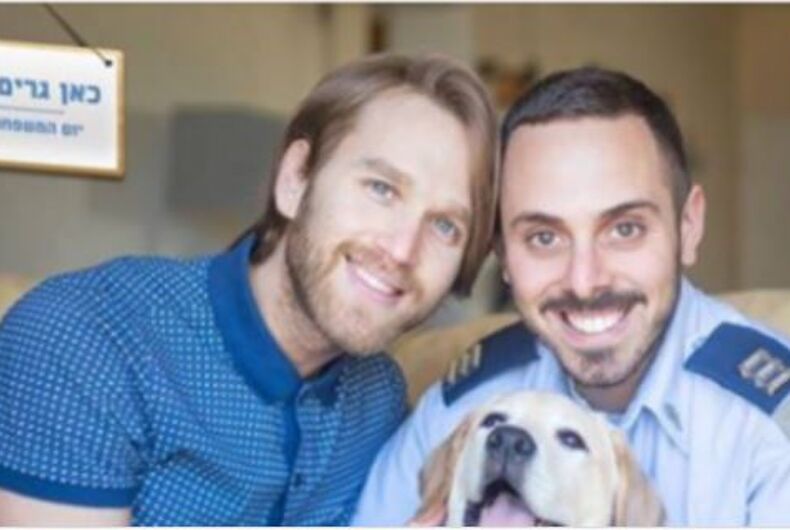 Capt. Adir Gabbai, right, and his husband, Dean, posing with their dog in a photo for Family Day. Photo: Facebook

The Israeli Air Force celebrated Family Day on its official Facebook page with photos of military members and their families, including a gay air force officer and his husband.

The Hebrew language post was shared with the headline “living here happily.” One of the couples was a smiling Capt. Adir Gabbai and his partner, Dean. They met while in the air force, and the post came with the description, “For them, the air force family will always be ‘the place where I met my family.'”

The reaction was mixed, reports the Israeli newspaper Haaretz.

Some praised the air force for including a gay couple, while others criticized the inclusion, with one individual suggesting they should keep their relationship private. Another wrote, “You’re the air force, not some party of crazy people!!!”

The air force was having none of that and decided to show exactly who they are to the haters.

“In honor of Family Day, we have chosen to carry out a project presenting all of the kinds of families that serve in the air force, including also same-sex families. From our standpoint, they are all equal and all of us are one big family. Wishing you a Happy Family Day and a wonderful week,” it wrote in response, garnering thousands of likes.

The English language page simply posted a single photo, of a little girl on a man’s shoulders in front of a plane, shot from behind, along with the text, “Family comes first! Happy Israeli Family Day from the IAF.”