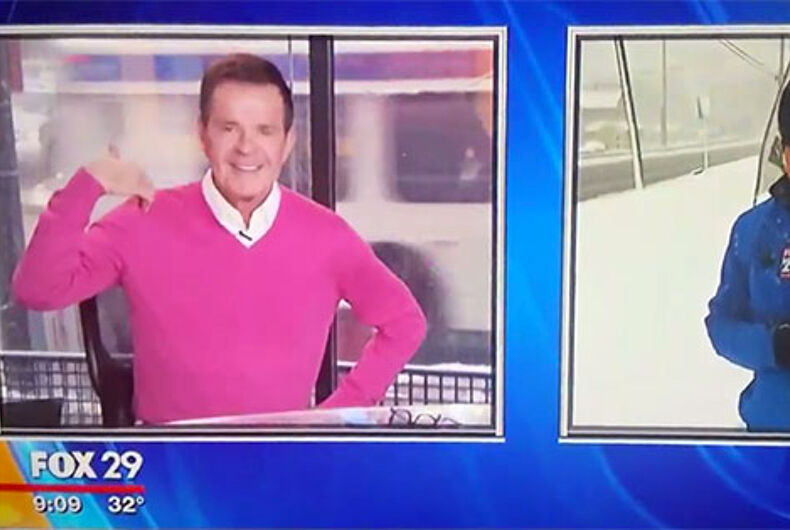 Steve Keeley, a reporter for the Fox owned and operated television station in Philadelphia, is the kind of “guy’s guy” who uses words like “lowlife” and “creep” in his reporting. But Philly magazine is now calling him a “loser” and “the biggest tool in local media.”

Last week, Keeley was chatting live on TV with the host of “Good Day Philadelphia,” the Fox station’s morning show, when he tried making a “joke” that was clearly homophobic.

Longtime anchor Mike Jerrick happened to be wearing a bright, bold pink sweater, as Unicorn Booty reported. And that prompted Keeley to ask him to take part in a “joke” he said originated in grade school.

Then Keeley told Jerrick that the school chum who taught him this “joke” would say to him, “Hi, guy.” That’s where the awkward 45 second episode of blatant homophobia ended.

To Jerrick’s credit, his immediate response was to stop and say “I don’t think this is appropriate.” He turned his right hand in the opposite direction and declared he’d rather be a teapot.

Keeley told the audience he’ll laugh later. No word from the station as to whether he faces disciplinary action, nor did management offer a statement in support of the LGBTQ community, as of press time.

Angry viewers targeted Keeley online with tweets about his “joke.”

You of all people have no room to criticize someone with style. Real men wear pink.

Editor’s note: the station where Keeley works is branded “Fox29 Philadelphia” and the show is named “Good Day Philadelphia.” An earlier version of this report inadvertently identified the show as “Good Day PA,” and that has been corrected. We apologize to “Good Day PA” for the mixup.