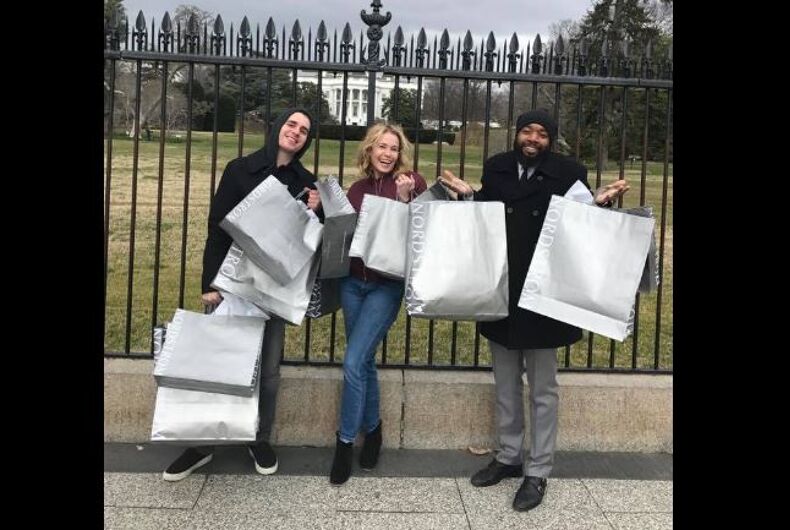 Chelsea Handler and friends at the White House. Photo: Facebook

Chelsea Handler is a vocal critic of President Trump and recently channeled some of that disdain into retail therapy with a message.

Handler posted a photo of herself, along with two of her friends, one a gay man and one a Muslim man, on Thursday in front of the White House holding Nordstrom bags. The company recently dropped Ivanka Trump’s clothing line.

Nordstrom said in a statement to NBC News that the decision was not politically motivated, nor was it in response to a #GrabYourWallet campaign to get stores to stop selling her products in protest of Trump’s policies, but rather that it was purely a business decision based on performance.

Trump tweeted out his disapproval at the decision, saying his daughter was being treated unfairly and that the decision was “terrible.”

White House Press Secretary Sean Spicer called the move by Nordstrom a “direct attack on his policies and her name.”

Spicer addresses Trump Nordstrom tweet: “This is a direct attack on his policies and her name” https://t.co/sRDFPughq9

There are also questions as to First Lady Melania Trump’s apparent intention to profit off her rising star power, based on language found in a libel lawsuit against the Daily Mail for reporting rumors that she had previously worked as an escort.

It is claimed in the filing that she missed out on a “unique, once-in-a-lifetime opportunity, as an extremely famous and well-known person, as well as a former professional model, brand spokesperson and successful businesswoman, to launch a broad-based commercial brand in multiple product categories, each of which could have garnered multi-million dollar business relationships for a multi-year term during which plaintiff is one of the most photographed women in the world.”

Melania is also a successful entrepreneur. In April 2010, Melania Trump launched her own jewelry collection, ‘Melania™ Timepieces & Jewelry,’ on QVC.

It was updated to read:

Melania is also a successful entrepreneur. In April 2010, Melania Trump launched her own jewelry collection.

Handler recently appeared on “The Daily Show,” where she talked about how difficult seeing Trump become president was for her.