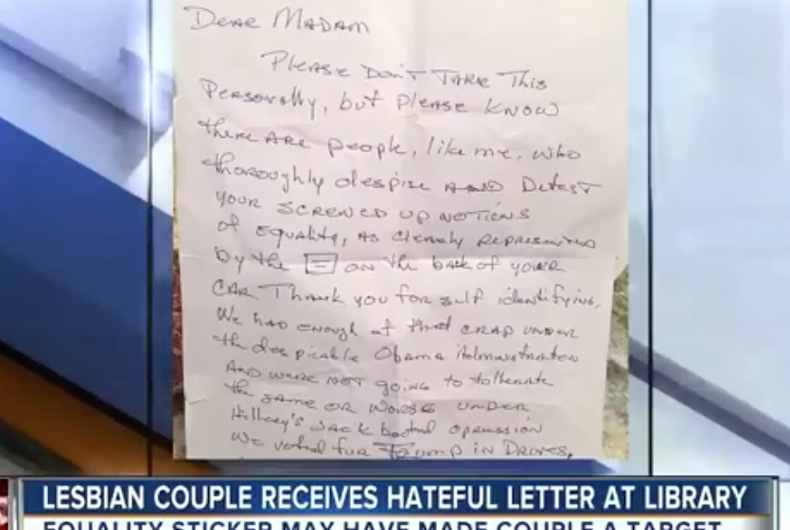 This note was left on the car of an older lesbian couple attending a Democratic women's meeting.Photo: ABC Action News

A lesbian couple in their mid-70s were leaving a Women’s Democratic Club meeting in Tampa, Florida, when they discovered a nasty note on their car saying they “despise and detest” the women’s “screwed up notions of equality.”

Their car, which was parked in a handicap accessible spot in front of the local library, had an HRC equality bumper sticker, which may have made them a target. Though the note’s attempts at courtesy, and its gender-specific honorific, suggest the note’s author had some awareness of who the car belonged to:

Dear Madam, please don’t take this personally, but please know there are people like me who thoroughly despise and detest your screwed up notions of equality, as clearly represented by the equality sticker on the back of your car. Thank you for self identifying.  We had enough of that crap under the despicable Obama administration and we are not going to tolerate the same or worse under Hillary’s jack booted oppression. We voted for Trump in Droves, and will do so again in 4 years. Regards, John Q. Republican

The couple was too unnerved to do an interview, but a woman who was at the meeting with the couple, Patty Cohn, told ABC Action News that the note was shocking.

“We don’t know who wrote this nasty letter to them, but obviously it was coward,” said Cohn. “They weren’t just attacking those two elderly women they were attacking all the people who stand shoulder to shoulder with those women.”

Members of the Hillsborough County Women’s Democratic Club meeting said they are planning hand out the equality stickers as a show of support for the couple.