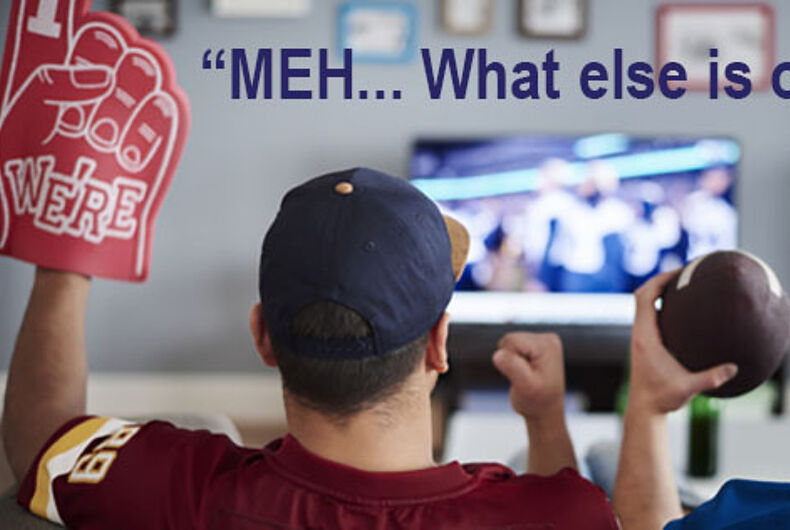 Clearly, not everybody is going to watch the Super Bowl tonight, even though more than 100 million people will. Yes, just so you know, it’s the night of the big football championship game, and it is tonight, on Fox, beginning at 6:30 p.m. EST in Houston. Oh, and this year the teams playing are the Atlanta Falcons vs. the New England Patriots.

And for all of us who are seeking an alternative to the extravaganza, or just want something else to watch in between the commercials and Lady Gaga’s halftime show, here are just a few choices:

Yes, depending on where you live it might be nice to just step away from the computer and/or television and enjoy a walk, or some fresh air. Take a drive, maybe eat out someplace where there are no big screen TVs. Folks in New York City, Los Angeles and Chicago are lucky that it just happens to be Restaurant Week. Even your backyard, front stoop, fire escape or roof is a nice respite for a few minutes away from all the hubub.

Fandango lists these films playing at a theater near you:

Rogue One: A Star Wars Story

Plus, Babe, Balto, The Nightmare Before Christmas, and one of Pixar’s latest movies Finding Dory are now all on Netflix, and the last season of Regular Show is on Hulu. Click here for a list of some LGBTQ-specific films on Netflix.

Humphrey Bogart and Ingrid Bergman star in the 1942 classic Casablanca at 7 p.m. on Turner Classic Movies.

BEHIND THE SCENES OF “HAMILTON:”

Charlie Rose takes an in-depth look at the Broadway musical on “60 Minutes” at 7 p.m. on CBS. It’s a rerun but a good one.

The Hurt Locker airs at 6 p.m. on Showtime, The Simpsons Movie is on Cinemax at 6 p.m., The Huntsman: Winter’s War is at 7 p.m. on HBO and Cinemax has The Intern starring Robert DeNiro at 8 p.m.

And Comedy Central has back to back episodes of “South Park.”

THOSE OTHER BOWL GAMES:

And for those who prefer fluffy friends to tight ends, there are animal alternatives to the traditional game.

Kitten Bowl IV is on the Hallmark Channel.

And NatGeo Wild has a fishy alternative to furry, with The Fish Bowl.