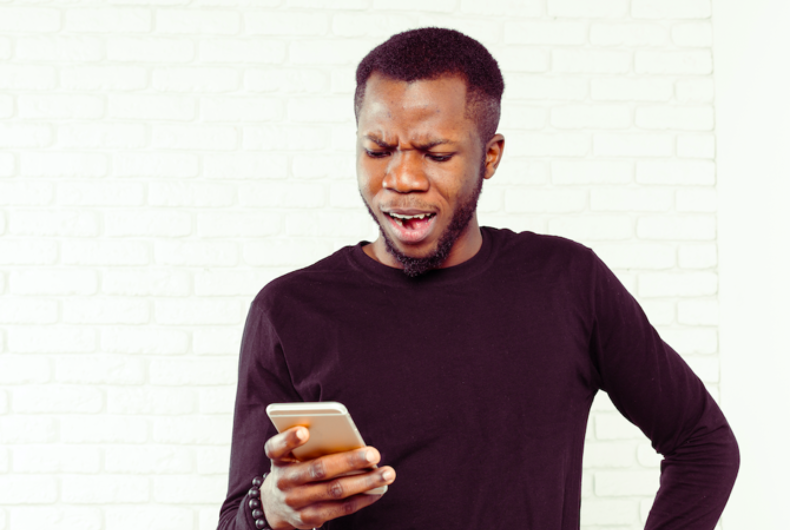 What’s a randy non-black gay guy to do? Well, first, take a deep breath and calm down. He’s only human. But he’s not necessarily easy prey. Regardless of what your casually racist friends may have told you, black doesn’t equal desperate and dumb.

Take it from a black guy who’s been on the receiving end of too many clunky come-ons to count: We’re as discerning as the next white guy. If you’re dying to satisfy your curiosity–and if you want to get anywhere, don’t mention your curiosity–there are some things that you simply must not say.

Here are 10 ice breakers that will likely end up being deal breakers. So don’t go there…

It’s amazing how many guys make this declaration as if it’s original poetry. Look, we know Grindr is basically a virtual meat market, but we’re not pieces of beef at the end of a toothpick on a sampler platter. And we don’t all “taste” the same. To use another familiar food analogy, even chocolate comes in many different flavors.

On the flipside of No. 1 is this, a favorite line of chocolate addicts. I know they mean it as a compliment, but it’s really not.

If someone says, “I love white men,” all white men wouldn’t be floored by the flattery, and who would expect them to be? White men come in a variety of too many different looks to be easily categorized as one entity.

Newsflash! The same thing goes for black men. Just because some people think we all look alike doesn’t mean we’re a single entity. We’re separate individuals with specific personal characteristics. Start by singling out one of them. You just might get to see more.

Well, technically, we’re mostly various shades of brown, but we get the message. Lately an alarming number of guys are also including photographic examples of black-on-white action. I don’t even know what to say to that. Oh, wait. Yes, I do. BLOCK!

Unless that opening line is actually referring to the British Broadcasting Corporation, we’re likely to think that we are so low on the chain of respectability that we don’t even warrant complete sentences, much less complete words.  A simple “Hello” generally leads to a much more productive exchange.

Oh, did my big, um, smile give me away? Seriously, we’re all perfectly aware that size matters to a lot of gay men, regardless of race. But it’s obvious why certain guys make this particular assumption. And to answer the statement with a question: Isn’t “huge” in the eye of the beholder? One man’s Range Rover can very well be another’s Fiat.

We can’t forget this lovely variation on No. 5. Some people won’t even finish the question these days, presumably because they already know how ridiculous it is. Aside from the obvious racist implications of perpetuating that crusty old Antebellum-era stereotype, there’s this: The guy who asks is often the same one who’ll say icky things like “Do whatever you want to do to me.” Um, no thanks.

I’d never seen this one until I was living in Cape Town, and a black American friend showed me the shocking message he had received from a guy he approached.

A lifetime spent witnessing systemic racism from the safe side of the fence had no doubt corroded his judgement, but his words weren’t the only shocker. In his profile pic, he was wearing a t-shirt with the face of a Native American man printed on it!

I suppose if you’re going to be blatantly racist, you might as well temper it with a heaping dose of irony. Not that he was smart enough to be deliberately ironic.

Ugh. The sequel to “Once you go black you won’t ever go back.” I’ve never been crazy about the original, and I’m definitely not feeling part two. Saying all white guys are unattractive is no better than saying the same thing about all black guys or all Asian guys or all whatever. It’s exclusion based on race.

If this one were an actual sequel, it would go straight to video.

Without fail, this one always leads to deal breaker No. 6. So a word of advice to the curious: Just quit while you’re way behind.

Jeremy Helligar is the author of Is It True What They Say About Black Men?: Tales of Love, Lust and Language Barriers on the Other Side of the World. You can tweet him @Theme4Gr8Cities

In the Trump age, civil disobedience is cast as ‘terrorism’ to squelch protest