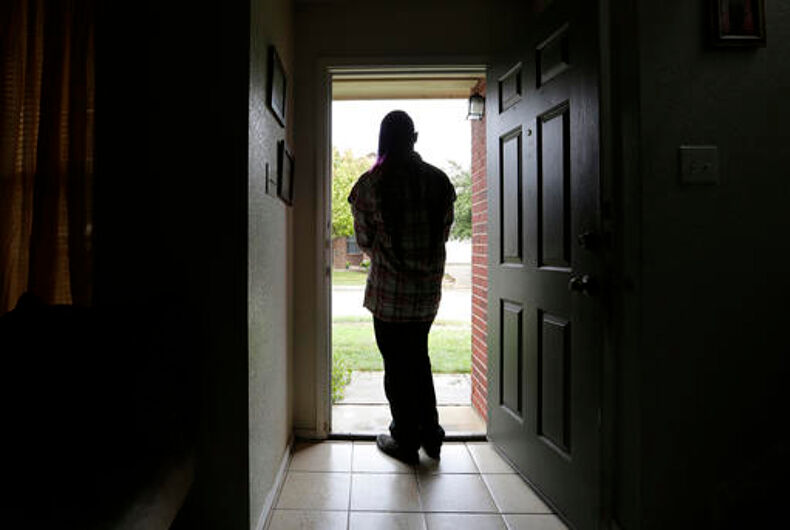 FILE - In this Monday, Dec. 5, 2016 file photo, a 19-year-old transgender teen, who declined to be identified because she feared for her life after receiving death threats earlier in the year at a halfway house, poses for a photo in Texas. Advocates say the nation's foster care system and homeless shelters are largely ill-equipped to house transgender young people, leaving them vulnerable to bullying, sexual assault, depression and suicide. Photo: (AP Photo/Eric Gay)

NEW YORK (AP) — For most Americans, Chelsea Manning has been a hero or villain based on how they view her decision to leak classified material. For transgender people, she has another dimension — serving as a potent symbol of their struggles for acceptance.

With Tuesday’s commutation of her prison sentence by President Barack Obama, she’s now due for release in May, when she will re-enter a society bitterly divided over many aspects of transgender rights.

Known as Bradley Manning at the time of her 2010 arrest, Manning came out as transgender after being sentenced to 35 years in an all-male military prison. Under Army rules, she was barred from growing her hair long while incarcerated, and only after litigation by her legal team was she approved for hormone therapy.

She spent long stints in solitary confinement, and twice tried to kill herself.

Chase Strangio, the American Civil Liberties Union attorney who filed the medical-care lawsuit, said Manning has viewed herself as a transgender-rights activist even in the isolation of her confinement at Fort Leavenworth.

“She’s always been a hero to me,” said Strangio, a transgender man. “Her story really does reflect so much of the systemic discrimination that transgender people face — struggles growing up, suppression of her gender that prompted her to join the military … and facing particularly egregious conditions in prison.”

“She’s an incredibly thoughtful and devoted person,” Strangio added. “She’s felt a sense of responsibility to the transgender community and wanted to be someone who contributed to the fight for transgender justice.”

Jennifer Finney Boylan, a transgender author who teaches at Barnard College in New York, expressed hope that Manning would remain an activist and share her experiences. In an email, Boylan depicted Manning as “a woman who’s been trapped both physically and metaphorically, finding herself smack in the middle of national disagreements about both the meaning of our war in Iraq as well as the ongoing national conversation about gender.”

“She is seen as a very public face for the complexity of gender, particularly the injustice facing anyone doing time in a facility for men who is surely, by the measure of her own heart, a woman,” Boylan wrote.

Dean Spade, a transgender law professor at Seattle University School of Law, hailed Manning as “an immensely important figure for the trans movement and for the broader LGBT movement.” Manning faced conditions in prison that denied her gender, Spade said, and “the world has watched her go through this.”

A cautionary note was sounded by Dana Beyer, executive director of Gender Rights Maryland, who said there was no consensus about Manning among transgender Americans.

“The community is divided on her actions, and parading her around as a hero will not only negatively impact her,” and exacerbate the split among transgender people, Beyer wrote in an email. “Manning as the face of the trans community would be very dangerous.”

Manning was convicted of leaking many thousands of classified government and military documents to WikiLeaks while serving as an intelligence analyst in Iraq. There was testimony at her trial about her erratic behavior and emotional stress during her Army service.

Among those denouncing the commutation of her sentence was Jerry Boykin, a retired Army general who is now executive vice president of the conservative Family Research Council.

“President Obama chose political correctness over our national security,” Boykin said in a statement that referred to Manning with male pronouns and decried the legal efforts to compel the Army to pay for gender-transition procedures.

The Pentagon recently adopted a policy of allowing transgender people to serve openly in the military. Some conservatives are suggesting a reversal of the policy after President-elect Donald Trump takes office, although Trump’s pick for defense secretary, James Mattis, told the Senate Armed Services Committee he has no such plans.

However, many transgender activists fear that Trump’s administration will abandon the Obama administration’s efforts to enable transgender students to use the bathrooms of their choice at public schools. And in Texas, Republican legislators are pushing a bill that would limit transgender people’s bathroom access.

Among the many problems faced by transgender Americans, their treatment in the criminal justice system is of particular concern to activists. Many juvenile detention centers are ill-equipped to handle transgender teens, and corrections officials in many jurisdictions have sought to avoid paying for sex-reassignment surgeries for adult inmates.

After Manning’s release, the Army will be off the hook for the costs of any further gender-transition medical care that she receives. However, Chase Strangio, the ACLU attorney, said the matter of cost was not paramount. “She can finally navigate her medical care on her own terms,” he said.

Shannon Minter, a transgender man who serves as legal director of the National Center for Lesbian Rights, said activists rallied behind Manning partly because her experience epitomized many of their community’s problems.

Her case “has shed a light on the serious abuses that transgender people — and in particular, transgender women — suffer daily in our nation’s prisons and jails,” Minter said. “While Chelsea’s experience is extraordinary in many respects, the abuses she has experienced as a result of being transgender are commonplace and deserve far more attention.”