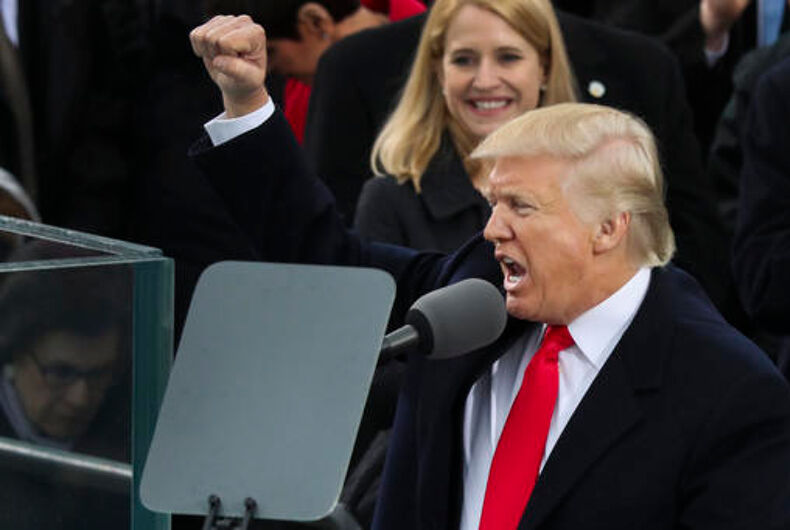 President Donald Trump pumps his first at the end of his speech after bring sworn in as the 45th president of the United States during the 58th Presidential Inauguration at the U.S. Capitol in Washington, Friday, Jan. 20, 2017.Photo: AP Photo/Andrew Harnik

“At the bedrock of our politics will be a total allegiance to the United States of America, and through our loyalty to our country, we will rediscover our loyalty to each other.”

“When you open your heart to patriotism, there is no room for prejudice.”

Unfortunately Donald, you confuse patriotism with unrestrained nationalism, the latter of which you have pushed ever since you threw your bomb-hat into the ring 18 long months ago. The bedrock of your entire candidacy rested totally on prejudice against and scapegoating of anyone and everyone who did not look like you.

The angry diatribe you called your Inaugural Address at your swearing-in ceremony atop the Capitol balcony, overlooking the National Mall, was not meant to unify a deeply divided country following a brutally traumatic election. Instead, you emphasized your perennial themes of division, recrimination, and blame.

Your incessant reprise of “America first” harkens back to the late 1930s when the so-called “America First Committee” warned about Jewish Americans pressuring our government to join World War II by placing their needs over the needs of the country. In fact, “Our Country First” has been the battle cry of nationalist fascism throughout the world.

Yours Donald, was the bleakest, angriest, ugliest, most apocalyptic of all the many inaugural speeches I have heard since I first listened to John Fitzgerald Kennedy in January 1961. In one single day, we changed as a country with a President with grace and dignity to another with bluster and rage, from one with formidable intelligence and supreme self-knowledge to another with a narcissistic arrogance and a lack of self-understanding that pose great peril not only to our nation, but to the entire world.

But the most discouraging aspect of a thoroughly discouraging day was not so much the words you spoke during your inaugural invective, but, rather, it was that the announcement came following your continual stream of very frightening nominees to fill key positions in your primarily all-rich-white-men’s club cabinet.

You just announced your pick of John M. Gore, an attorney at the Jones Day firm, as undersecretary in the U.S. Department of Justice who would lead the Civil Rights Division. Not only have you already decided to reduce funding for the Civil Rights Division, but your choice of Gore gives us all the clear picture that you have no interest in protecting the rights of minoritized people.

Gore has been defending the North Carolina higher education system from legal challenges to maintain its discriminatory HB2 law that prevents trans people from using public bathroom facilities that most closely correspond with their gender identities.

In the recent past, Gore defended electoral redistricting schemes against challenges on civil rights grounds. In addition, he defended Gov. Rick Scott and the state of Florida against charges of violating the National Voter Registration Act. The Miami Herald discovered that “Hispanic, Democratic and independent-minded voters are the most likely to be targeted,” while whites and Republicans were the least likely.

During the campaign, Trump asked minoritized racial groups to vote for him saying, “What do you have to lose?” Well, if his cabinet picks are any indication, and in particular his choice of Jeff Sessions for Attorney General and Gore to head the Civil Rights Division, we all have plenty to lose.

Also, before Trump’s election, Gregory T. Angelo, president of the Log Cabin Republicans told the New York Times that “[Trump] will be the most gay-friendly Republican nominee for president ever.”

While this is not saying much since most Republican nominees have been generally hostile, I would tell Angelo that his log cabin is on fire and he should seek shelter elsewhere.

Transgender men in Georgia win the right to change their names

What ‘Hidden Figures’ can teach the LGBTQ community