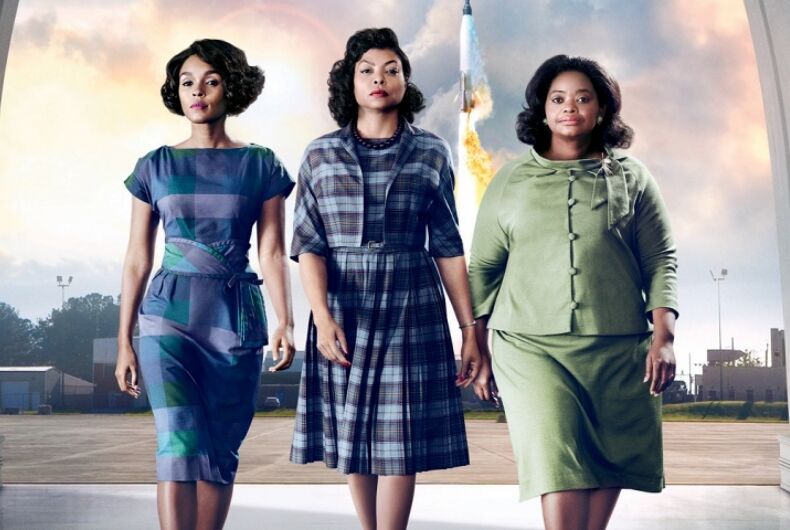 “Hidden Figures” has now spent two weeks as the number one movie in the country. And its story about facing and overcoming bigotry is an important one for any community that faces discrimination — including the LGBTQ community.

The events of “Hidden Figures” echo an anecdote from The Autobiography of Malcolm X. When a teacher asked him what line of work he wanted to pursue after school, he said he wanted to be a lawyer. The teacher told him that wasn’t a realistic line of work for a black man (he didn’t say “black man;” he said a word that is not repeatable).

How many times did this happen? How many men and women were denied the chance to pursue their talents and ambitions? How many lawyers, engineers, scientists, teachers, political leaders, entrepreneurs, etc. have we missed out on – and continue to miss out on?

Many of us in the LGBTQ community have run into those same barriers of race and gender. And others of us have come up against homophobia or transphobia barring the way to our dignity and our dreams.

“Hidden Figures” shows us how to get around those barriers or, even better, drive right through them, leaving the path open for others:

Attack even the smallest injustices. When Katherine Johnson is asked about her frequent absences during the day, she points out that there is only one bathroom for African-American women in the entire Langley base — and it takes her 40 minutes to go and come back. That small fact, presented to someone who probably had never even thought about that reality, leads to the integration of the bathrooms at Langley. Confronting a small injustice leads to a big victory.

Make it impossible to be ignored. Katherine Johnson, Dorothy Vaughan, and Mary Jackson were all able to break through prejudices by being the best at what they did — and that made them impossible to be ignored or belittled. Be the best you can be at your chosen profession. Be loud and proud and aggressive in fighting for your rights. Live your life openly and freely. Make them hear and see you.

Fighting bigotry isn’t just about passing laws. It’s about changing hearts, minds, and attitudes. That’s hard, long work. It takes years, perhaps generations. But it can be done. “Hidden Figures” shows us one of the paths to victory.