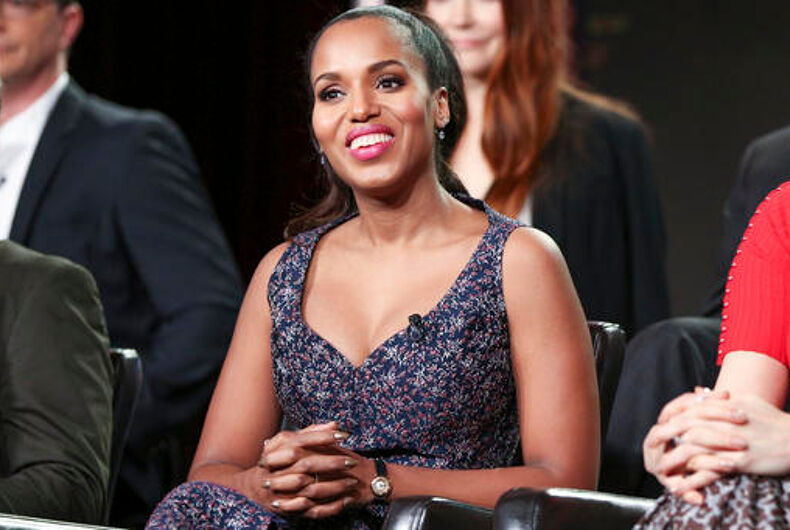 PASADENA, Calif. (AP) — There’s the world of Trump and the world of Scandal. Don’t go looking for similarities between the two, because the ABC show’s creator certainly isn’t.

The series returns to ABC’s lineup on Jan. 26 with its own election, early episodes that were filmed before the world learned the results of the real-world contest between Donald Trump and Hillary Clinton.

“I don’t really equate the two,” said Scandal executive producer Shonda Rhimes on Tuesday. “That’s not really the goal. If it was the goal, we would have waited until after the election” to film new episodes.

The show is beginning its sixth season, and ABC can use the ratings boost. The season was shortened from 22 to 16 episodes to accommodate star Kerry Washington’s pregnancy, and Rhimes said being able to concentrate on fewer programs sharpened the storytelling.

Even though she was obviously busy, Washington said she and the show’s other stars sought each other out to talk about what happened on election night.

“Over the years, these are the people I’ve become closest to in many ways,” she said. “It was strange to have to find each other on hiatus, to kind of check with each other and process it.”

Rhimes batted away political questions during a meeting with reporters, including one about Meryl Streep’s Golden Globes speech. She said she had no problem with ABC postponing the show’s debut for a week for the network to air a pre-inauguration special.

Most new HIV infections in Europe are in Russia