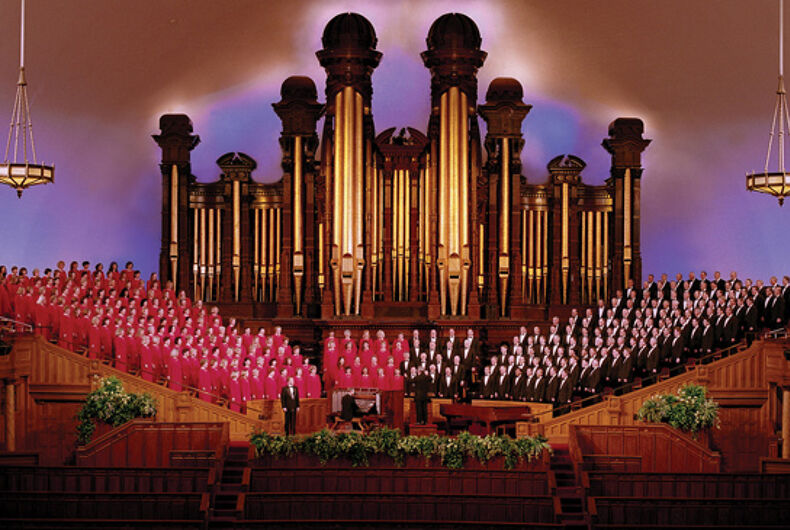 I was asked to sign a petition, which asks the Mormon Tabernacle Choir not to perform as scheduled at Donald Trump’s inauguration. The petition read in part:

We, as signers of this petition, believe that The Church of Jesus Christ of Latter-day Saints’ decision to allow the Mormon Tabernacle Choir to perform at the upcoming presidential inauguration of Donald Trump DOES NOT reflect the values of Mormonism and does not represent its diverse 15+ million members worldwide.”

I could not sign the petition in good faith, though, because I believe Donald Trump and the values of Mormonism do, in fact, align. Since its very founding and continuing over time, the Church of Jesus Christ of Latter-day Saints (LDS) has perpetuated in policy and action, as has Donald Trump, numerous forms of oppression, and in terms of LDS, most notably sexism, heterosexism, racism, and anti-Jewish oppression.

Men are called as high priests because of their exceeding faith and good works — They are to teach the commandments — Through righteousness they are sanctified and enter into the rest of the Lord — Melchizedek was one of these — Angels are declaring glad tidings throughout the land — They will declare the actual coming of Christ.    About 82 B.C.”  — Chapter 13, Book of Alma in The Book of Mormon

The Bishops Council of LDS (an all-male assembly) recently excommunicated life-long committed member in absentia, Kate Kelly, on the charge of “apostasy” for “conduct contrary to the laws and order of the church.” The “conduct” to which the Bishops refer amounts to Kelly’s lobbying efforts for the Church to change its policies and finally allow women’s ordination. Kelly serves as a lawyer and she cofounded the website OrdainWomen.org as a forum to raise issues and provide discussion on this crucial topic. According to the website:

“Ordain Women aspires to create a space for Mormons to articulate issues of gender inequality they may be hesitant to raise alone. As a group we intend to put ourselves in the public eye and call attention to the need for the ordination of Mormon women to the priesthood.”

The Bishops told Kelly in an email message that she could gain reinstatement after one year if she exhibited “true repentance” and relinquished her activism for women’s ordination. Kelly, however, claiming she “did nothing wrong,” vowed not to give up her fight, and though she does not have hope for a reversal, she plans to appeal the decision.

Homosexual behavior violates the commandments of God, is contrary to the purposes of human sexuality, distorts loving relationships, and deprives people of the blessings that can be found in family life and in the saving ordinances of the gospel. Those who persist in such behavior or who influence others to do so are subject to Church discipline. Homosexual behavior can be forgiven through sincere repentance.” — The Handbook of Instructions, Church of Jesus Christ of Latter-day Saints.

These words supposedly expressed God’s revelation to the leadership of LDS, and reaffirmed in 1995 when the First Presidency and the Quorum of the Twelve Apostles entered the debate on the parameters of marriage by issuing The Family: A Proclamation to the World.

It stated in part, “We, the First Presidency and the Council of the Twelve Apostles of the Church of Jesus Christ of Latter-day Saints, solemnly proclaim that marriage between a man and a woman is ordained of God and that the family is central to the Creator’s plan for the eternal destiny of His Children” and claiming that the power to create children “is not an incidental part of the plan of happiness. It is the key – the very key….This commandment has never been rescinded.”

Leaders and members of the Church, therefore, justified contributing an estimated 20 million dollars to the 2008 California Ballot 8 initiative campaign, which succeeded in limiting the rights and benefits of marriage to one man and one woman.

If the Church’s position on same-sex attractions, expression, and marriage for same-sex couples was not clear enough, LDS President of the Quorum of Twelve Apostles, Boyd K. Packer, referred to homosexuality throughout a sharply worded sermon as “wrong,” or “basically wrong,” “wicked,” “impure,” “unnatural,” “immoral,” “against nature,” “evil,” and as a threat to civilization. Packer’s sermon, delivered to the more than 20,000 participants in the LDS Conference Center in Salt Lake City, and millions more watching on satellite television at the Church’s 180th Semiannual General Conference in October 2010, stated in part:

In red states, businesses are gearing up to fight anti-trans bathroom bills