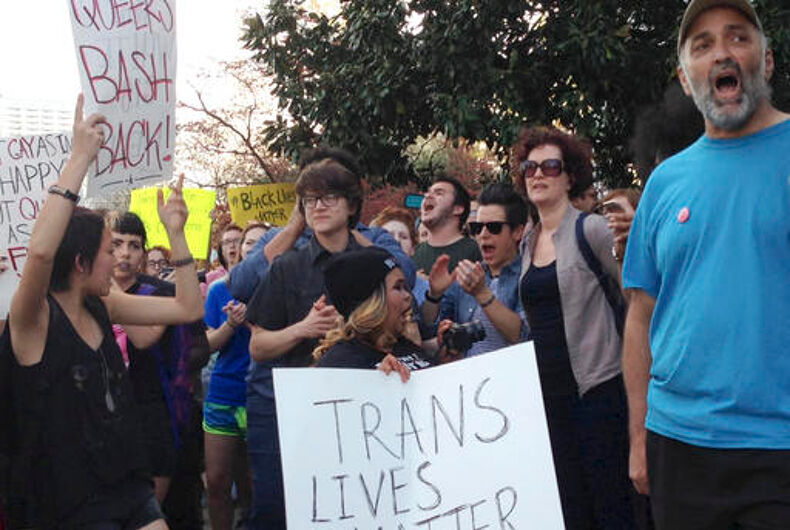 FILE- In this March 24, 2016, file photo, people protest outside the North Carolina Executive Mansion in Raleigh, N.C. Tennessee businesses have banded together to try to convince their state legislators to snub laws similar to the infamous bathroom bill in North Carolina, which has consumed that state's politics for months and scared off businesses and sporting events. Photo: (AP Photo/Emery P. Dalesio, File )

NASHVILLE, Tenn. (AP) — Sean Henry, the president of Tennessee’s NHL team, is stunned he even has to explain why he hopes state legislators will snub bills similar to North Carolina’s transgender bathroom law, which has consumed that state for months and scared off businesses and sporting events.

The Nashville Predators team is among about 300 companies, ranging from health-care giant HCA to FedEx, joining under the moniker Tennessee Thrives to oppose bathroom and religious objection bills, which they consider discriminatory and bad for business. Companies in other GOP-led states have had success voicing opposition under similar names: Georgia Prospers, Opportunity West Virginia, Missouri Competes.

“I honestly cannot believe that in 2016 I’m actually asked a question as to why I would support anti-discrimination groups,” Henry said. “I think the real question is: who hasn’t joined?”

Social progressives hoping to hold back that tide appealed to citizens’ sense of equality and people’s pocketbooks.

Despite the political and economic repercussions that erupted in North Carolina, the American Civil Liberties Union expects an increase in statehouse proposals limiting LGBT protections in 2017.

Frank Cannon, president of the socially conservative American Principles Project, encouraged Republicans to push back against those trying to cast North Carolina’s bathroom bill as a financial liability. He pointed to a GOP wave led by President-elect Donald Trump as proof that the public still embraces social conservatism.

“Republicans must keep fighting because, while the left was able to successfully define HB2 as an economic issue and convince elite corporations and celebrities to punish the state of North Carolina for protecting the privacy of young girls, their overreach clearly backfired in the presidential race in a big way,” he said.

North Carolina’s law omits LGBT people from state anti-discrimination protections and orders transgender people to use bathrooms in schools and government buildings that align with the sex on their birth certificate. Businesses, conventions and sports events have avoided North Carolina in protest, and Republican Gov. Pat McCrory lost his re-election under heavy criticism for signing the law.

Now, as lawmakers begin their work this winter, some Republicans are heeding business groups’ warnings to steer clear of the laws, even in some of Trump’s more favorable turf.

Kentucky looks on paper like a state likely to embrace a law like North Carolina’s: the GOP won control of both legislative chambers in November for the first time in a century, and Republican Gov. Matt Bevin joined a lawsuit this year challenging the federal government’s directive that public schools allow students to use the bathroom of their gender identity. Yet Bevin, a staunch social conservative, has dismissed calls for a bathroom bill.

“Why would we?” he said. “Is there anyone you know in Kentucky who has trouble going to the bathroom? The last thing we need is more government rules. I’m cutting red tape, not creating it.”

This spring, Georgia’s legislature passed a bill aimed at shielding religious people who deny services because of a moral objection. Within days, Coca-Cola and other big-name Georgia companies joined prominent Hollywood figures calling for a veto. The Walt Disney Co., Marvel Studios and Salesforce.com threatened to take business elsewhere. The NFL said the potential law would factor into whether Atlanta hosts the 2019 or 2020 Super Bowl.

In West Virginia, where Trump won every county and more than 68 percent of the popular vote, the incoming state Senate President said his poor state desperately needs economic opportunity and should not wade into controversial social issues in 2017.

“Putting forth solutions to problems that don’t exist is not going to be on our agenda,” Republican Sen. Mitch Carmichael said.

Still, bathroom bills have been introduced in Republican states that include Alabama, South Carolina and Missouri, where the governor’s mansion changed from Democratic to Republican control. And in South Dakota, where GOP Gov. Dennis Daugaard vetoed a bathroom bill in 2016, the bathroom issue could make the 2018 ballot.

The state has faced backlash for passing a 2016 law that lets therapists decline to see patients based on religious values and personal principles. As a result, the American Counseling Association canceled a Nashville convention, calling the law discriminatory.

Tennessee Thrives says it’ll advocate for policies of inclusivity and nondiscrimination. The group hopes its formation serves as warning shot to state lawmakers as the agenda takes shape for the session starting Jan. 10.

“They’ve done us a great favor,” Walker said. “They’re going to galvanize the conservative churches in Tennessee like they have never seen before.”

A perfect match: The Mormon Tabernacle Choir and Trump’s inauguration