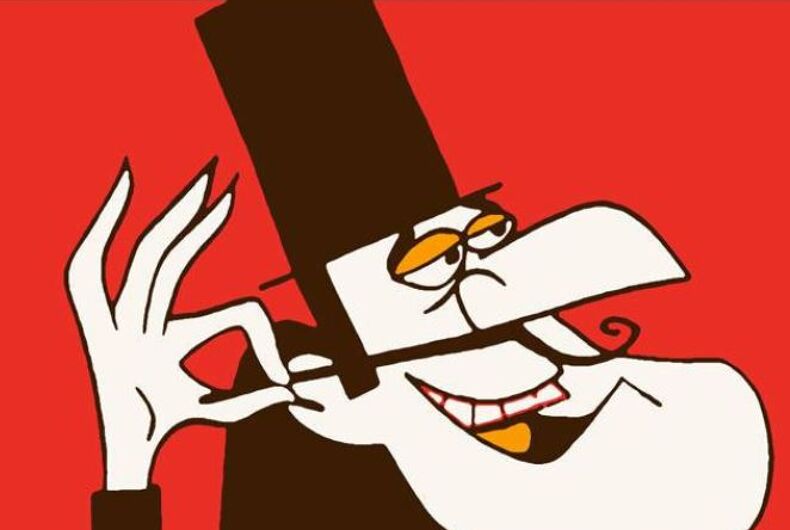 Snidely Whiplash would have been a Republican.Photo: screenshot

WASHINGTON (AP) — House Republicans have voted to eviscerate the Office of Congressional Ethics, the independent body created in 2008 to investigate allegations of misconduct by lawmakers after several bribery and corruption scandals sent members to prison.

The ethics change, which prompted an outcry from Democrats and government watchdog groups, is part of a rules package that the full House will vote on Tuesday. The package approved Monday also includes a means for Republican leaders to punish lawmakers if there is a repeat of the Democratic sit-in last summer over gun control.

Under the ethics change pushed by Rep. Bob Goodlatte, R-Va., the nonpartisan Office of Congressional Ethics would fall under the control of the House Ethics Committee, which is run by lawmakers. It would be known as the Office of Congressional Complaint Review, and the rule change would require that “any matter that may involve a violation of criminal law must be referred to the Committee on Ethics for potential referral to law enforcement agencies after an affirmative vote by the members,” according to Goodlatte’s office.

Lawmakers would have the final say on their colleagues under the change. House Republicans voted 119-74 for the Goodlatte measure despite arguments from Speaker Paul Ryan, R-Wis., and Majority Leader Kevin McCarthy, R-Calif., against the change. They failed to sway rank-and-file Republicans, some of whom have felt unfairly targeted by the OCE.

“The amendment builds upon and strengthens the existing Office of Congressional Ethics by maintaining its primary area of focus of accepting and reviewing complaints from the public and referring them, if appropriate, to the Committee on Ethics,” Goodlatte said in a statement.

“Republicans claim they want to ‘drain the swamp,’ but the night before the new Congress gets sworn in, the House GOP has eliminated the only independent ethics oversight of their actions,” the California Democrat said in a statement. “Evidently, ethics are the first casualty of the new Republican Congress.”

Kellyanne Conway, a top adviser to President-elect Donald Trump, said she had not talked to him directly about the issue but that under the previous system there had been “overzealousness” in going after lawmakers. “We don’t want people wrongly accused,” she said Tuesday on ABC’s “Good Morning America.”

Others said the new system would make it easier for corruption to flourish Ryan and his leadership team.

“We all know the so-called House Ethics Committee is worthless for anything other than a whitewash — sweeping corruption under the rug,” Chris Carson, president of the League of Women Voters, said. “That’s why the independent Office of Congressional Ethics has been so important. The OCE works to stop corruption and that’s why Speaker Ryan is cutting its authority. Speaker Ryan is giving a green light to congressional corruption.”

The OCE was created in March 2008 after the cases of former Rep. Randy “Duke” Cunningham, R-Calif., who served more than seven years in prison on bribery and other charges; as well as cases involving former Rep. Bob Ney, R-Ohio, who was charged in the Jack Abramoff lobbying scandal and pleaded guilty to corruption charges, and former Rep. William Jefferson, D-La., convicted on corruption in a separate case.

Simmer down: Milo Yiannopoulos won’t get a book review and that’s okay