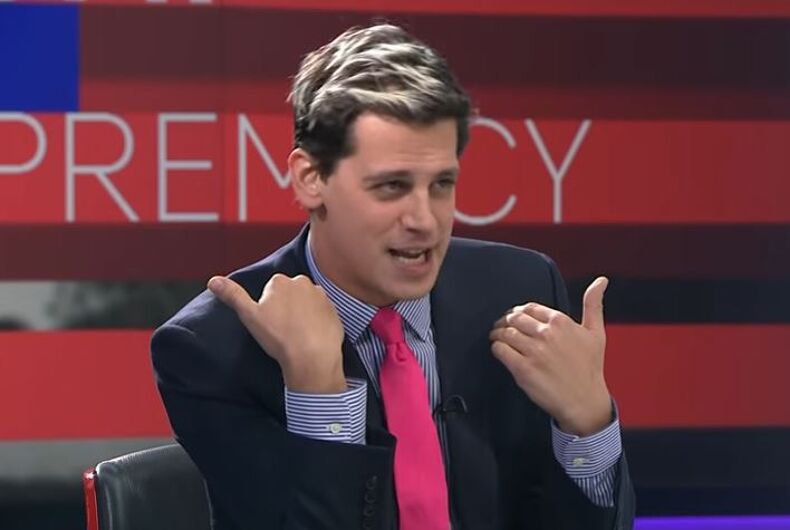 The Chicago Review of Books announced that it wouldn’t be reviewing any books from publishing giant Simon & Schuster because the latter gave a $250,000 book deal to noted transphobe and misogynist Milo Yiannopoulos. Brietbart, the Daily Caller, and the Daily Stormer (no links, you can google) have all denounced what they call an attack on free speech.

Because… book reviewers are supposed to review every book that ever gets published? Other reviewers will somehow be prevented from reviewing Simon & Schuster’s books? Yiannopoulos’s fans care so much what the Chicago Review of Books (started in February 2016) thinks about any book that they won’t buy it without reading the review?

Yiannopoulos, who got famous by being an internet troll, is known for bragging about how any attempt to speak out against him only makes him more popular as if it’s a sign of how slick he is. Now a nascent book blog just got links from several huge alt-right websites and its name dropped in some large mainstream publications like The Daily Beast.

Rightwingers generally take pride in making liberals mad, but liberals are offended at the suggestion that anything they do isn’t done out of genuine fealty to their professed principles. So my guess is that publicity wasn’t the Chicago Review of Books‘ conscious intent, but kudos to them anyway for playing the game well.

Of course, what the Chicago Review of Books is doing is no threat to free speech, mainly because it’s highly unlikely they have the clout in the industry necessary to affect Simon & Schuster’s publication decisions. It’s David and Goliath, where Goliath can drop a quarter of a million dollars on a silly book deal and David is less than a year old.

It would be an interesting hypothetical to ask if the same would be true if the New York Review of Books took the same stance, but, of course, it would just remain an hypothetical question: people care what the New York Review of Books has to say about books because it reviews books that people are reading, and people will be reading books by Simon & Schuster in 2017.

Which is enough to answer that hypothetical: no, it would not hurt free speech for the New York Review of Books to shoot itself in the foot that way. Readers can find book reviews easily with the Google nowadays and someone will always be willing to review Simon & Schuster’s books.

What’s more scary is how being an internet troll is now a legitimate path to real-world fame. Jesus Christ, Simon & Schuster, don’t feed the trolls.

They have none: House Republicans send clear message about ethics