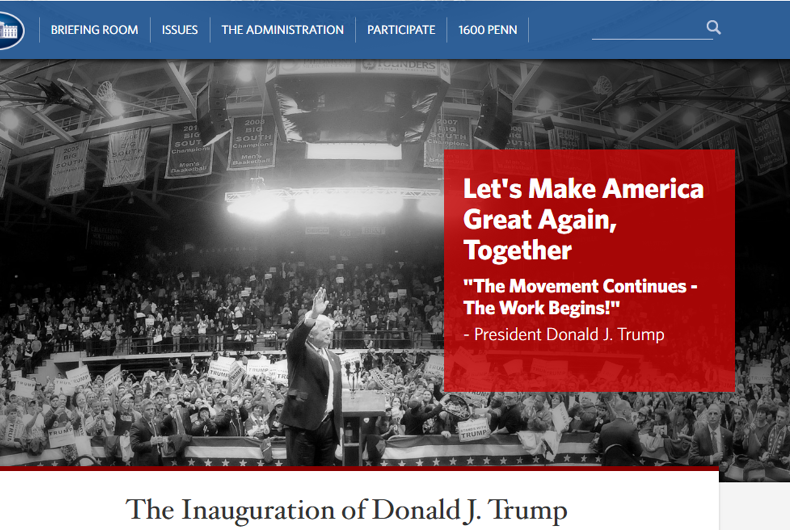 Donald Trump has officially been sworn in as the 45th president of the United States, and as a result the official White House website has changed hands.

On the new site, absent are any mention of LGBT rights, as well as any mention of climate change, as has been noted by a number of media outlets. A search brings up no results for either.

While it may seem as if the incoming Trump administration scrubbed the site of these pages and references, that is an inaccurate reading of the situation. As detailed in a statement, a digital transition has taken place which moves WhiteHouse.gov to ObamaWhiteHouse.gov.

The new WhiteHouse.gov is still sparse, as noted by Snopes.

“Its blog currently hosts one post (about the inaugural address), while pages for Press Briefings, Statements, Nominations, and Presidential Actions are all blank,” they write.

A search for “economy” comes up with some results, but still not much.

Unrelated to the WhiteHouse.gov switch, the Labor Department’s report on LGBT workplace rights is no longer online.

Some of what the new WhiteHouse.gov does say is also causing alarm. Such as the “America First Foreign Policy” page.

“The Trump Administration is committed to a foreign policy focused on American interests and American national security,” it begins. It goes on to promise a ramping up on building the military, as Trump campaigned on, as well as pledging to embrace diplomacy.

Some see the line about old enemies becoming friends as a nod to Russia.

“The dangerous anti-police atmosphere in America is wrong,” says the page on law enforcement. “The Trump Administration will end it.”

“Our job is not to make life more comfortable for the rioter, the looter, or the violent disrupter,” it adds.

The official bios for Trump, Vice President Mike Pence and their wives have also gone up. Trump’s is particularly laudatory, calling him “the very definition of the American success story.”

You can read the full bio here.