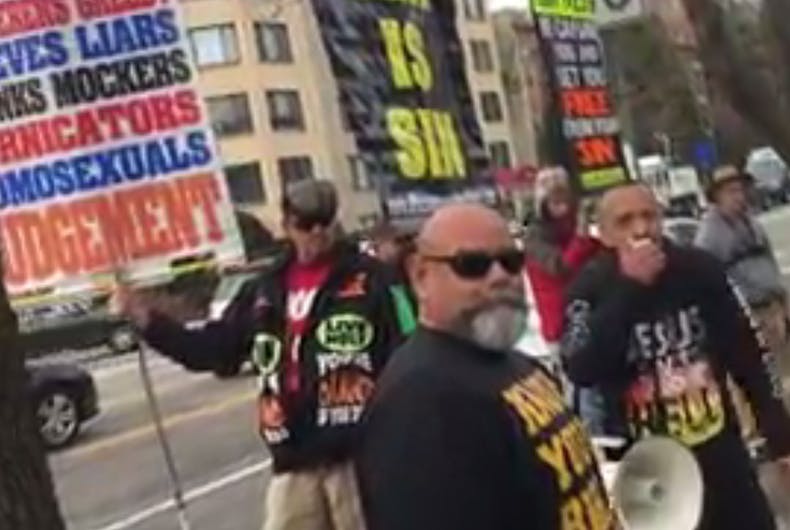 Protestors outside Comet Ping Pong left by the time the restaurant opened.Photo: Screenshot

Anti-gay protesters demonstrated outside Comet Ping Pong in Washington, D.C., Thursday, with signs that said “Homo sex is sin” and “Judgment is coming,” in video captured by The Washingtonian.

Comet Ping Pong, owned by openly gay man James Alefantis, is a pizza restaurant that came into the spotlight in an incident known as “Pizzagate,” where a gunman from North Carolina entered the establishment with an assault rifle on December 4th. Internet conspiracy theories insinuating that Hillary Clinton was involved with a child sex trade operation in the basement of Comet Ping Pong circulated last year, and Edgar Maddison Welch, 28, decided to “self-investigate” and possibly free the children. Welch surrendered himself to police when he found “no evidence” of children being “harbored” in the restaurant. Comet Ping Pong does not have a basement.

The protesters did not have a clear objective. Signs did not refer to the Pizzagate conspiracy theory, but one demonstrator asked why the restaurant wasn’t open at noon, said Barack Obama is a Muslim, and linked Islam to pedophilia.

Two police officers were at the scene “to make sure they don’t attack our customers or anything,” according to the owner of the business next to Comet Ping Pong.