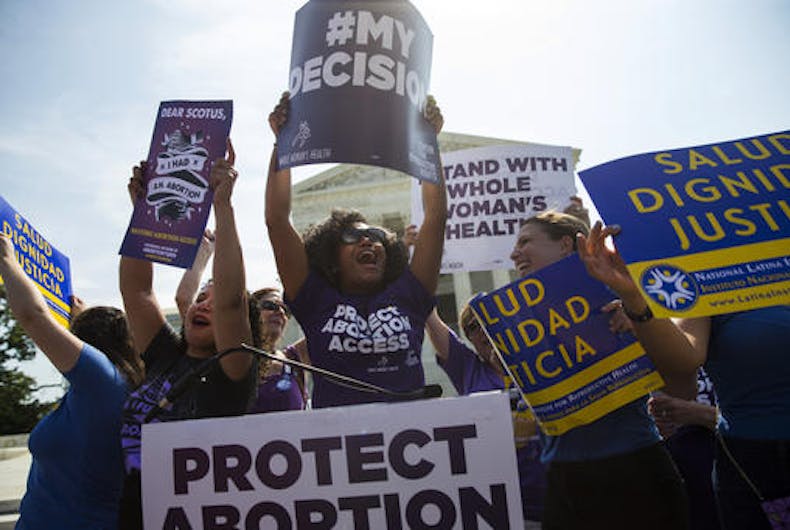 FILE - June 27, 2016 file photo pro-abortion rights activists celebrate during a rally at the Supreme Court in Washington. The tens of thousands of women flocking to Washington for a march on the day after Donald Trump's inauguration come packing a multitude of agendas, including LGBTQ equality.Photo: AP Photo/Evan Vucci, File

When throngs of women from around the nation converge on Washington for a march on the day after Donald Trump’s inauguration, they will arrive driven by a multitude of motivations.

Gay rights, gun control, immigrant rights, equal pay, reproductive freedom, racial justice, worker rights, climate change, support for vaccinations: They all make the list of progressive causes that are attracting people to the Women’s March on Washington and its sister marches across the country and the world this coming Saturday.

“We are not going to give the next president that much focus,” says Linda Sarsour, a national march organizer and executive director of the Arab American Association of New York. “What we want from him is to see us in focus.”

But while Trump’s name may not literally appear in the march’s “mission and vision” statement, the common denominator uniting the marchers appears to be a loathing for the president-elect and dismay that so much of the country voted for him.

“This march feels like a chance to be part of something that isn’t pity, isn’t powerlessness,” says Leslie Rutkowski, an American living in Norway who plans to fly back for the march. “I hope it is unifying. I hope it flies in the face of Trump’s platform of hate and divisiveness.”

Adds Kelsey Wadman, a new mom in California who’s helping to organize a parallel march in San Diego: “It’s not just about Donald Trump the person. It’s about what he evoked out of the country.”

The march in Washington is set to start with a program near the Capitol and then move toward the White House. It probably will be the largest of a number of inauguration-related protests.

Christopher Geldart, the District of Columbia’s homeland security director, said he expected the march to draw more than the 200,000 people organizers are planning for, based on bus registrations and train bookings.

The focus of the march has been a work in progress since the idea of a Washington mobilization first bubbled up from a number of women’s social media posts in the hours after Trump’s election.

The group’s November application for a march permit summed up its purpose as to “come together in solidarity to express to the new administration & Congress that women’s rights are human rights and our power cannot be ignored.”

That phrasing rankled some who thought it was tied too closely to Hillary Clinton, the defeated Democratic nominee, whose famous Beijing speech as first lady declared that “women’s rights are human rights.” The fact that the initial march organizers were mostly white women also generated grumbling, this time from minorities. Gradually, the march’s leadership and its mission statements have become more all-inclusive.

Recent releases from march organizers state the event “intends to send a bold message to the incoming presidential administration on their first day in office, to leadership in the U.S. House of Representatives and Senate, and to the world, that we stand together in solidarity and expect elected leaders to act to protect the rights of women, their families and their communities.”

America Ferrera, leading the celebrity contingent for the march, rolled out a long list of concerns in a statement announcing her role.

“Immigrant rights, worker rights, reproductive rights, LGBTQIA rights, racial justice and environmental rights are not special interests, they affect us all and should be every American’s concerns,” she wrote.

Other prominent names involved with the march have put a spotlight on one concern — or another.

Actress Scarlett Johansson, who plans to participate, put her focus on the incoming administration’s intentions of “reducing the availability of women’s health care and attacking her reproductive rights.” Actress Debra Messing, listed as a supporter of the march, wrote of the need to protect Planned Parenthood.

Expect thousands of the marchers to turn up wearing hand-knitted pink “pussyhats” — sending a message of female empowerment and pushing back against Trump’s demeaning comments about women.

Wadman, the California mom, tweeted a #WhyIMarch photo with her 4-month-old son and this note: “Because when my son asks me about this era of American history I don’t want to tell him that I did nothing.”

Rutkowski, the American living in Norway, emailed that she’s “not completely satisfied” with the mixed messages attached to the march.

“I also don’t like— from what I’ve seen in the news and on Facebook — the proclivity for infighting,” she wrote. “But I believe that a quarter of a million female bodies — hopefully more, hopefully men, as well — will make the incoming administration and new Congress aware that we are watching, we are listening and we will resist.”

Carmen Perez, one of the march’s national organizers, sees beauty in the many messages attached to the march: “Women don’t live single-issue lives and we are thrilled to be joined by women who understand and reflect the intersecting issues for which we stand.”