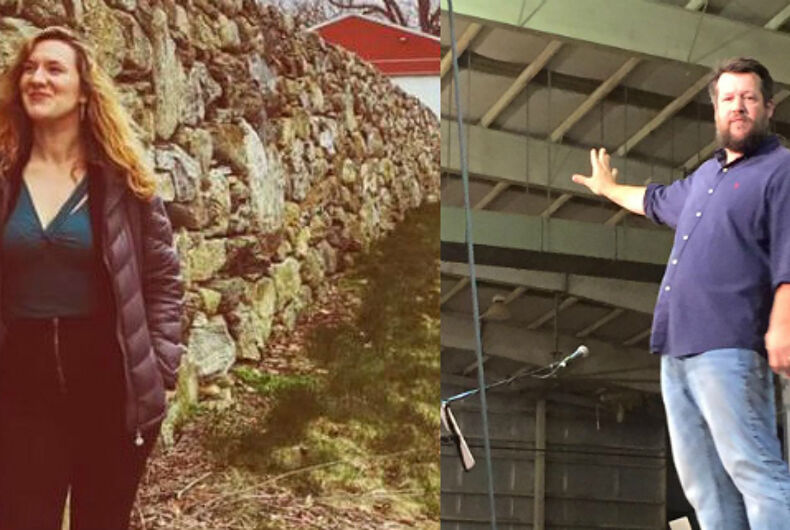 The daughter of a nationally syndicated right-wing Christian talk show came out as bisexual in a Friday column for AL.com.

Brandi Burgess is the daughter of Evangelical radio personality Rick Burgess, who is the cohost of “Rick and Bubba,” an Alabama-based show that includes anti-gay sermons.

In the bluntly honest column, Brandi explains that while she was often a character in his parables growing up, those stories took a different turn after she came out to her family as bisexual.

Now, she says, her father uses her as a warning to others.

“The story my father tells is one of a lost lamb, covered in shame,” Brandi writes. “In his public musings, he speaks of my sin. Without my consent, he uses me as a cautionary tale.”

Things first became tense three years ago after she posted a photo she posted on social media.

“It started with my Instagram post at a Pride parade: a picture of a mother holding a sign saying ‘I love my gay son,'” Brandi recalls. “I got a text demanding its removal: ‘How dare you compromise my platform!?’, ‘Remember who you represent.’, ‘Are you a gay?’

And while she prayed and reflected on the sermons and verses her father shared with her over the years, her views did not change. She still believed same-sex affection was not a sin, and she still loved her father and God. She even promised to be discreet. But, Brandi says, her father couldn’t even meet her halfway.

“This led to a constant barrage of shame,” she says, offering examples of what her father would say to her: “You think you’re so mod, so special. But you’re nothing. You’re typical.”

So she decided to speak out, so that others in similar situations would know they are worthy of love and respect.

“I love you. Your worth is untouchable. Find a good friend. Invest in therapy. Dance in the middle of the night and hold yourself accountable to the life you’ve always wanted,” Brandi writes. “At the root of all this hate speech is fear. This is not your fear to carry. Release it.”

Now, Brandi’s father and step-mother are speaking out on the radio show about their “struggle.” They use the platform of Rick and Bubba to deliver a sermon of sorts on how they are handling the conflict with their Brandi.

“This has become a new version of Christianity,” Rick claims. “Sadly, our daughter and others have bought into this new hippie version of Jesus.”

While he insists that he loves his daughter, he also says that it would not be love to accept her as a bisexual woman. He also suggests that Jesus would want him to treat his daughter as an enemy if she commits blasphemy against God.

Brandi’s step-mother Sherri shares how she continues to struggle to accept the reality of the situation.

She said she believes their family conflict is “a battle between the Bible and the world. God versus the world.” But she holds out hope Brandi will change.

“This daughter is not gone,” Sherri says, “so we have all the hope in the world she will come back to us.”