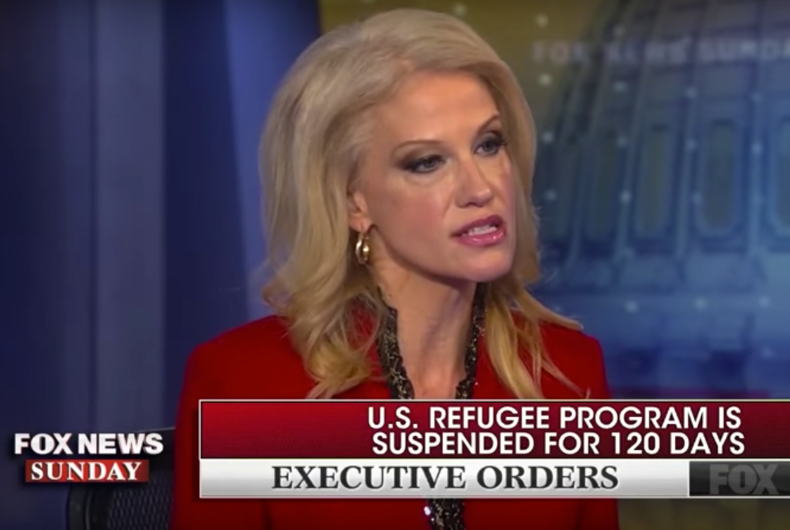 When host Chris Wallace asked her if the administration had failed to anticipate the consequences of the ban — which included the detention of permanent U.S. legal residents, a translator who worked with the U.S. military, students at U.S. colleges and universities, among others — Conway described the lives affected as appropriate collateral damage.

“You’re talking about 325,000 people from overseas came into this country just yesterday through our airports. You’re talking about three hundred and some who have been detained or are prevented from gaining access to an aircraft in their home countries and must stay for now,” Conway explained. “That’s 1 percent. And I think in terms of the upside being greater protection of our borders, of our people, it’s a small price to pay.”

There is no indication that any of hose detained or prevented from entering the country are suspected of any illegal activity. As many have noted, Trump’s executive order does not ban travelers from countries where deadly terrorists have actually come from, and avoids including any country with which the President has personal business dealings. The list of countries from which Trump’s executive order banned travel includes Iraq, Syria, Iran, Sudan, Libya, Somalia and Yemen.

And while a federal judge issued a stay of that order following a legal challenge from the ACLU, Conway said that it will have little impact on the President’s executive order.

Conway told Fox News that once detained travelers are determined to not be a threat, they will be released, though she initially said that the travelers would be “disposed of.”

She then tried to minimize criticisms of racial and religious profiling by arguing that the detention of legal residents, visa holders, and refugees from certain Muslim countries is akin to broadly enhanced security measures following the attacks on September 11.

“I was stopped many time — weren’t you? — after 9/11. I didn’t resemble or share a name with or be part of any kind of terrorist conspiracy, but this is what we do to keep a nation safe,” Conway said. “This whole idea that they’re being separated and ripped from their families, it’s temporary, and it’s just circumstantial in terms of whether you were one of those 300 and some who was already on an aircraft or trying to get on an aircraft, as opposed to the over 3,000 children who will be forever more separated from the parents due to 9/11.”

The hijackers who carried out the attacks of September 11, 2001, were from Saudi Arabia, the United Arab Emirates, Egypt, and Lebanon. These countries are not included in Trump’s ban.

Art exhibit looks at what it means to be transgender